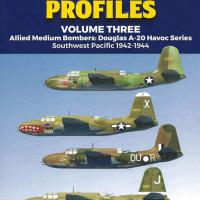 This third volume of Claringbould’s aircraft profiles, the first of Allied aircraft, highlights the Douglas A-20 Havoc (Boston to the Commonwealth forces). The A-20, and its stablemate the B-25, were the two-workhorse low level attack aircraft of the US Fifth Air Force in the Southwest Pacific.

At one time or another, the A-20 equipped three medium bomber groups in New Guinea - the 3rd, 312th and 417th (the 3rd often known by its pre-war moniker, the “3rd Attack Group”). Each of the three groups’ four squadrons are identified here by their individual squadron emblem as well as the aircraft tactical markings applied in theatre. Each squadron chapter is illustrated with photographs documenting aircraft nose art, at least 4 and as many as 16 color aircraft profiles plus spot nose art enlargements, and a paragraph or two describing each aircraft profiled with its operational history (sometimes flown by several squadrons) and eventual fate. Other chapters describe in similar detail A-20s with the RAAF’s No. 22 Squadron and miscellaneous A-20s (Training Command a/c, squadron hacks, etc .) There are a total of 100 aircraft profiles. The book’s opening chapters briefly detail technical aspects of the theatre’s A-20, the evolution of Squadron and Group markings, and the environment where these aircraft flew - and its effects on the appearance of these aircraft over time, all with accompanying photographs and color illustrations. There’s even a final chapter of one particular A-20G, the Hell’N Pelican II, discovered by the author in the New Guinea jungle in 1976, salvaged by the RAAF in 1984 and eventually displayed in Queensland, Australia.

This book is an absolute gem for anyone interested in Pacific A-20 operations. It’s chocked full of information and color aircraft illustrations, much more so than books several times this size. Raised in Port Moresby, Australian Michael Clairingbould is a world respected authority on aircraft and air forces that flew in the southwest Pacific, so each profile and aircraft history is well researched and documented. He is also an accomplished illustrator providing his own detailed and realistic digital images. Claringbould’s books are fast becoming my first-choice references, and with his wealth of knowledge on the subject of SW Pacific aircraft I eagerly anticipate his future volumes in this series.

Thanks to Casemate Publishing and IPMS for the opportunity to review this excellent book.