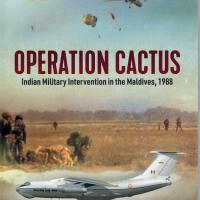 This book is Number 26 of the “Asia War” series. The book is divided into 6 sections, two appendixes, Bibliography and notes. One of the sections is the introduction to Operation Cactus, as well as a small history, and the location of the Maldives Islands.

This introduction section, introduces you to the Sri Lanka’s Tamil insurgents. You are also introduced to the politics, and the economy of the Maldives Islands and the genesis of the Coup.

Section three pertains mostly to the attack of the rebel forces and their actual plan the rebel forces had, >as well as the assault by said troops. This section ends with the call for help by the Maldives Government to India.

The next section talks about the response by India, their reaction, as well as how the Indian Air Force and Navy prepared for going into battle. Most of the section is dedicated to the paras. Units involved include the 50th Para Brigade, and the 17th Para Field Regiment. The support provided by the engineers artillery and other branches are presented.

The last section gives us the arrival of the Indian forces and how they defeated the rebels. The last section provides the complete defeat of the rebels, their escape and capture and the gratitude of the Maldives Government for India’s help in defeating the rebels.

The book has very good pictures of the equipment used by the Indian forces. The part I enjoyed the best was the profiles of 12 airplanes, as well as those of the soft skin equipment and the Indian forces battle dress. The book has a fair amount of equipment photos throughout and my only regret is that there are none in color. But, like my father used to tell me: ”Son, you can not have it all.”

Many thanks to Casemate Publishing for allowing me to review the book.