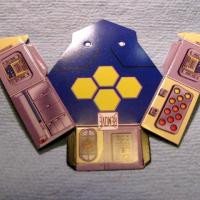 The IPMS Reviewer Corps was recently contacted by the folks from TSDS Incorporated, asking if we would be interested in reviewing some of their products. The company is producing interiors, decals, and lighting sets for the Jupiter 2, Space Pod, and Chariot from "Lost in Space" that are produced by Moebius, as well as decals for the "Land of the Giants" Spindrift kit. Decal/detail sheets are available for the Aurora/Monogram "Invaders UFO" kit and the Moebius "Invisible Man" and "Seaview" kits, and four different Flying Sub interior items are made for the Moebius 1/128 and 1/32 scale kits. If you are a fan of this particular genre, I would recommend checking out their web site to see what all is available, as well as their pricing.

I picked up my copy of the Moebius Flying Sub at the IPMS Nationals last year, as the kit looked interesting, and the scale seemed more manageable than the larger 1/32 scale kit that was previously released. This kit is actually meant to go with the thirty-nine inch long Seaview kit of the same scale, for those who are interested. Left alone, the interior of the kit is rather bland with some hexagonal moldings, two bucket seats, and little else. This fold-up interior is quick to put together, and provides adequate detail once the sub is fully assembled.

My sample arrived with a small single page instruction sheet and the color part, which is printed on thin card stock. Oddly, the assembly instructions are also contained on the backside of the part, which is printed in faded colors, and seems to make the separate sheet redundant. Anyway, I had some trepidation initially as the part looked a little "cartoonish" to me, but once installed and closed inside the sub, it does help to dress things up quite a bit. On the TSDS web page, they show an assembled kit that someone added an interior light to, which also makes the interior stand out nicely.

The part is very easy to assemble, with the only challenge being to cut out a section marked as "Remove". The folds are all pre-made, and the two holes that need to be opened up to allow for the installation of the bucket seats are pre-punched. I used a thick super glue to set the tabs in place for the walls, and this seemed to work well, with a much better drying time than if I had used white glue. There appears to be a photo-etch set also available for the Flying Sub interior, but I do not know that it would enhance the interior much further than this easy to install part does in all of a couple of minutes of work (especially considering how much of the interior is visible through the front glass).

My hits for this item are the ease of assembly, and the way that the finished product fits the interior, and dresses up its appearance. The pre-punched holes were also a nice touch, making assembly that much easier for those using this product. My only miss, is that it would have been nice if the manufacturer for quicker removal had punched the section that needs to be removed. Of course, with a mere four cuts using a hobby knife, the section is not that difficult to remove anyway.

Therefore, in conclusion, I do like the color fold-up interior that is offered by TSDS Incorporated, and would highly recommend it to anyone wanting to add a better looking interior to his or her Moebius Flying Sub in 1/128 scale. My thanks go out to the folks at TSDS Incorporated for allowing the IPMS Reviewers' Corps to look at their offerings, and to you for reading my comments.