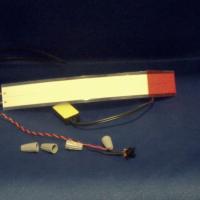 JAI produces a growing number of lighting sets for the Sci-Fi modeler, and for general modeling purposes. In conjunction with a recent review of the new Moebius Moon Bus, JAI provided their “Moon Bus Lighting Kit.”

Contained in the package were:

The on/off switches are “micro” switches, which means that they are very small and perform in the same manner as a typical light switch in your home, with the exception that the on/off lever “slides” back and forth rather than being toggled.

The two LED lights can be used for many purposes and on the Moon Bus I decided to use my two LED’s to replace the forward facing headlights that were molded into the kit that appear under the windscreen decking on the front of the Moon Bus. These same LEDs could also be mounted in the cabin area of the Moon Bus interior.

The most important piece within the lighting kit is the lighting strip which is attached to the underside of the cabin roof. The strip, when powered up, glows rather than shines. This is significant for several reasons. The lighting that is produced is diffused throughout the cabin in an even manner and it prevents a “hot spot” of light (such as a standard micro-bulb might generate) that would be visible through the roof material itself, from the exterior.

The light strip produces sufficient light to be seen in dim room lighting. The lighting effect generated by the strip will be enhanced in darker and more subdued room lighting or in a display case meant to limit the amount of overhead lighting that might interfere with viewing the Moon Bus with the lighting strip powered up.

For those who have never used any sort of wired lighting before it might, at first, be a little intimidating to see the collection of switches and wiring in the package. Not to worry. JAI includes a small instruction sheet with sufficient information for even a rookie “electrician”. The most important and helpful piece of information one can have when working with LED’s is that they function regardless of polarity. No negative or positive poles to worry about, just hook up the wires extending from the pre-wired harness and watch the light strip glow!

This lighting kit is highly recommended and thanks to JAI for providing this product.