Leyte 1944 Return to the Phillipines 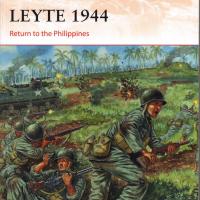 Osprey Publishing’s latest campaign monograph focuses on the battle waged by the US to regain the Philippine Islands held by the Japanese since 1942. This from the website: "The loss of the Philippines in 1942 was the worst defeat in American military history. General Douglas MacArthur, the 'Lion of Luzon', was evacuated by order of the President just before the fall, but he vowed to return, and in August 1944 he kept his word when he led what, at the time, was the largest amphibious assault of the Pacific War on the island of Leyte. This is the full story of that fateful battle, one of the most ferocious campaigns of World War II and one of huge strategic and symbolic significance. In the face of stubborn Japanese resistance, including the first systematic use of Kamikaze attacks, the US forces ground slowly forwards before another amphibious assault took the vital position of Ormoc in the last decisive battle of the campaign. Based on extensive research in the US Army's Military History Institute, along with other archival and veteran sources, this important study sheds new light on the operation that saw the US finally return to the Philippines and in doing so placed another nail firmly in the coffin of the Japanese Empire. ".

This book clearly and concisely focuses on the battles waged over the island of Leyte from October 1944 to December 1944. After an introduction and background, with short bios of the commanders, it's on too the nitty gritty, day to day, slug fest featuring the overwhelming US forces vs. the undersupplied, undermanned IJA forces, tasked with inflicting a decisive loss on the Americans that would turn the tide of the war. After the Leyte battle, it was on to Luzon, and another stepping stone was in place for the final assault on the Japanese islands. In addition to the ground war, the author focuses on the air war and its shortcomings due to airfield inadequacies, and the naval Battle of Leyte Gulf, where the IJN erroneously believed they had inflicted a devastating blow to the US naval forces.

A well done monograph on a decisive WW II battle, it is highly recommended for history buffs and modelers. Thanks to Osprey Publishing for the review copy, and thanks to IPMS USA for the opportunity to read and review this book.

Book Back
Previous Next