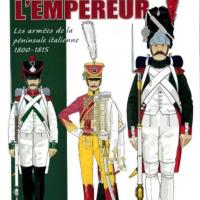 I’ll be the first to admit it – I’m getting hooked on these Heimdal uniform books. Any dedicated figure modeler is well aware of the fact that the period roughly 1790 – 1815 constitutes the highlight of colorful uniforms worn by any belligerents in any war, before or since. The development of coal tar dyes led to the creation of a bewildering range of bright colors, almost immediately employed by all the major military powers of the time, as they regarded the quality of their military attire to be a direct reflection of the power and majesty of their particular countries.

Napoleanic uniforms in particular reflected this obsession, with an almost unbelievable range of military costumes. For figure modelers, the fact that almost all of them were based in large part on standard French military garb means that one can, if one chooses, create a incredible array of accurate toy soldiers with uniforms spanning the rainbow.

Heimdal’s book, “Les Itailiens de L’Empereur” (Italians of the Emperor) is another offering in their range covering this important time in military history. Although the books are written in French, it scarcely dents the appeal. This volume, for instance, is a literal feast of eye candy from cover to cover, with hundreds of color plates demonstrating the staggering range of uniforms worn by this French ally. Most are clearly computer-generated, and sacrifice a little frivolity for sheer density of material. Many pages carry six or more such plates. The book is further enhanced by a number of plates painted by Eugene Lelièpvre, who should be familiar to anyone who has ever purchased a Historex kit. There are also historical paintings interspersed throughout, showing these uniforms as seen through contemporary eyes. Details of the uniforms are shown as well, leaving no confusion for the ardent figure modeler.

To be blunt about it, there is no better series of books for the dedicated Napoleanphile modeler to be found anywhere. None. This is the single most comprehensive, thorough and complete study of this period in uniform history that I have encountered in over 50 years of figure modeling. Your reference money simply can’t be better spent. Like any book in this series, I can recommend this one to any uniform enthusiast without the slightest reservation.

My thanks to Heimdal publishing for releasing these impressive books, and to IPMS/USA for a chance to review them and refresh my high school French at the same time. Happy modeling everyone, and stay safe!