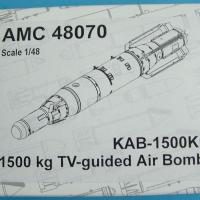 To those who model Soviet era and modern Russian aircraft there has been a welcome proliferation of weapons which have emerged on the market, so we have something to hang on aircraft models other than rocket launchers and dumb bombs. Unlike the west, the Soviet and now Russian military is not known for the use of smart ordnance; rare were the pictures of them fitted. But a wide range of smart weapons exist in the Russian inventory for specialized missions and the pictures coming from Syria show smart weapons being used.

A new manufacturer from Russia has come on the scene to offer perhaps the widest range of munitions than we have seen so far on the market – Advanced Modeling (AM). These are multi-media kits cleanly cast in gray, durable resin; the detail is superb.

This set provides a pair of 1500kg TV guided bombs (LGB). Several things are striking about this model of this weapon. First, this is a big bomb, over 3000lbs! So most aircraft will only carry a few of these, likely under the fuselage. Second are the really clear lens and the seeker components cast into the front of the bomb. Third, the strange control surfaces in the rear. This is the first time I have seen this weapon available in model form. The kit provides the bomb body (already finned), the seeker section, separate fins for the seeker head, separate control surfaces for the rear, a separate pour block of mounting lugs, clear seeker heads, a resin base plate and a decal sheet. Control fins are very thin but durable.

This kit was a bit tricky in both the mounting of the rear control surfaces, and the only hard part being separating the mounting lugs, cleaning them up, and attaching them without shooting them into a dark void. The nose section, once removed, slid easily into the recess of the bomb body. The base plates fit well – just ensure you have a clean mating surface to minimize gapping at the edge. After mounting the lugs, I attached the nose fins. AM provides a diagram on how these lay when folded, but pictures were a better reference. The rear fins were a challenge, not to remove from the pour block, but how to attach them. There is little of a mating surface and I found they kept shifting. So I used gap filling CA with accelerator. I left off the optic window until the last step.

To paint the weapon, I did no preparatory work. The instructions did not provide a color reference, so from available photos I chose Model Master Dark Ghost Gray. Mine was an old bottle and though a flat, went on glossy, which helped in decaling. Once dry, I applied the decals without issue; they were easy to work for such small markings and settled down with Micro Sol. I sealed the decals with Future and then applied a flat coat of Testors Dullcoat. I did get a little silvering, but that was due to the old paint. A black wash was used to highlight the details. I then brush-painted the inside of the seeker head flat black, and dry-brushed the details. I painted the camera lens gold with drop of Tamiya Smoke on top, which provided a realistic appearance to replicate the coated lens. When that was dry, I press fit the optic window – it needed no cement and gave a very clear appearance. The only thing missing are the imbedded silver wires of the lens, which is hard to replicate in scale.

Not a bad bit of work, except the fins and mounting lugs. The AM instructions list the aircraft types which carry this weapon, which is everything modern in the inventory, but I think that I will stick to a big jet. This is a great weapons set and just mean looking, perfect for the Su-24 or the SU-34s coming out. I highly recommend this set.