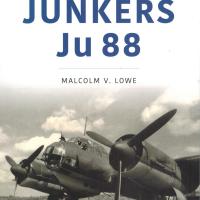 This is Volume 15 of the Historic Military Aircraft Series from the Publishers of FlyPast Magazine. The book is divided into 10 chapters with an introduction and glossary at the end of the book. The Introduction deals mainly with a short story of the Junkers Company. This include the pioneering work of the company into development of the all metal airplane, the inter-war success and finally how the company was seized and became completely owned by the NAZI Party. The company was fully amalgamated, finally in 1936. Chapter one touches on the development of the JU-88. The early idea was that the JU-88 would be that of an offensive aircraft, but the early vision of the designers wa changed due to an airplane crash in which the supporter of the fast offensive aircraft was killed in a plane crash. The person most influential in the many changes of the JU-88 was Ernst Udet. He was a firm believer of the tactical air force for close support. Service changes were made before entering service, one of which was to make the JU-88 able to dive bomb like the JU-87. This was not intended by the original designers. Other changes were the addition of defensive weapons; the cockpit and front of the plane were redesigned as well. It is interesting to note that the design of the JU-88 was started in 1936 and yet the planes did not fly in combat until 1939.

Chapter two introduces as to the JU-88 entry into service, and their use in the night BLITZ against England. Chapter 3 starts by talking about the changes to the aircraft from a bomber to a night fighter as well as the beginning of the JU-88 evolution into other types. In chapter 3 we start into the different modifications to the aircraft due to the needs of the Luftwaffe. This chapter addresses the "Zerstorer" (heavy fighter) and "Nachtjager" (night fighter). This chapter is the longest and has more detailed modifications of the aircraft.

Chapter four is a review of the many modifications of the plane throughout its service carrier. The many derivatives of the aircraft are touched upon throughout the chapter. There are at least 17 derivatives of the JU-88A model. Its uses include; cable cutting, torpedo bomber and medium bomber to mention a few. Chapter six talks about the plane being used as a photo reconnaissance aircraft or "flying spies.". Again the original JU-88A was converted into the JU-88S and JU-88H for this part of the service history of the plane. Mistel combinations are described in Chapter 7 and it shows the two major configurations of this particular type of airplane. They include the Mistel S3A , and the Mistel S1. The Mistel S3A is the combination of the JU-88 and of the FW-190. The S1 is the combination of a JU-88 and a ME-109. In chapter eight the use of the JU-88 by foreign air forces is described. The foreign users of this aircraft include the Hungarians, Finnish and French Air Forces.

Chapter nine talks about the "triple digit" wonders and describes the JU-188 and JU-388. Their development and use are described. The final chapter touches on the later development of the aircraft and cancellations. The Glossary explains the many German abbreviations used throughout the book.