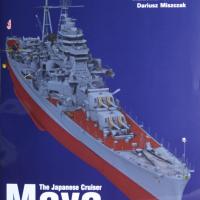 Thanks to Casemate Books for the review copy!

Kagero Publishing has produced a large number of WW2 warship books from their Super Drawings in 3D series, focusing on a single ship at a particular point in time (appearance). 16058 illustrates the Imperial Japanese Navy (IJN) Maya in its final 1944 so-called Anti-Aircraft (AA) fit. Maya was one of the four Takao class heavy cruisers important to IJN naval efforts in WW2. Damage from a bomb hit from US carrier planes while at Rabaul in 1943 led to Maya becoming the first AA conversion of IJN five-turret heavy cruisers. The C turret (closest to the bridge) was replaced by two of the ubiquitous 127mm/40 Type 89 twin open antiaircraft mounts, along with additional 25mm mounts (triple and single) throughout the ship. Maya shipped six twin 127mm AA mounts instead of the usual four carried by larger Japanese heavy cruisers This gave Maya a unique and distinctive difference from her sister ships and other cruiser classes, and a favorite modeling subject. Maya was sunk by US submarines on the way to the Battle of Leyte Gulf in November 1944 and did not get to utilize her recently enhanced AA capacity.

This book is another fine example of 3D series, ship-specific data in 82 full-color pages, with a short biography of the ship, extensive computer-generated (CG) color drawings of the entire ship, subsections, and fittings from various angles, along with the usual separate, foldout B&W line drawing insert of the ship and her fittings in 1/350 scale. With new angles, it feels like you are walking on a museum ship.

This book on Maya’s AA appearance is of the highest quality, detail and interest for modelers. All sorts of views, and close-ups of ship sections, and fittings (turrets, boats, torpedo tubes, masts, radars, etc.) are exquisitely illustrated in accurate color. It is my feeling (without solid evidence), that the printing has too much red, which makes the dark red-brown linoleum decks look redder than I had thought (and redder than the recent IJN Shimakaze decks in a recent 3D book (see the recent IPMSUSA review). But this is the only quibble and the authors have shown they thoroughly research every facet of a ship. They also explain that occasionally they make an educated guess about some details. An experienced modeler will understand that universal fittings for each navy’s warships are also found on other ships, so any book in this series will serve as a guide for common fittings per each navy.

This book is the first time I have seen crew members (loading the new 127mm AA guns) in a 3D Kagero book. Here’s hoping that eventually, crew members will populate future books and reprinted books in print.

If you plan to build the IJN Maya in its 1944 AA fit (which practically all the available kits in any scale depict) then this is the only resource you would need. If you have already built Maya then you had better not look too closely at your efforts – after seeing this book you will want to accurize. Thankfully, I have not built my 30-year old Aoshima 022 Maya kit yet.

Highest recommendation for building this ship and as a reference for universal IJN warship fittings in general.