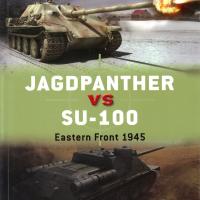 Both German and Soviet military theorists in the years leading up to WW2 incorporated tanks into their battle plans to exploit breakthroughs in the enemy’s lines. These tanks incorporated turrets capable of rotating 360 degrees, thus making them expensive and time consuming to produce and maintain. Little thought on either side was put into providing the slower moving foot soldiers with self propelled artillery or anti tank capabilities. The Germans were the first to see the utility of providing their troops with SPGs, with the introduction of the Sturmgeschutz (StuG) and Sturmartillerie, self propelled tracked vehicles with limited traverse guns protruding out the front end of the vehicle, and capable of knocking out enemy hard points and limited anti tank duties. Such vehicles were cheaper to manufacture than tanks. It wasn’t until the Germans invaded the Soviet Union in 1941 that Soviet military planners began to see the advantages of turretless vehicles, having run headlong into the German StuGs etc.

When I first received this book to review, and looking at the front cover, I presumed it was going to cover the German Jagdpanther and Soviet SU-100 over the course of its 80 pages. And sure enough, the first 32 pages of the book do indeed describe these two vehicles: basic coverage of the origins of each vehicle, development history, and production. The writing is a bit choppy, as if sections had been written at different times, and then cobbled together a bit higgledy-piggledy. Also the technical specifications covered with one vehicle aren’t the same technical specifications covered with the other in all cases.

However, from page 33 until the end of the book, we leave the discussion specifically of the Jagdpanther and SU-100, and launch into a military history of the Soviet liberation of Hungary from German occupation in 1945, followed by German counter attacks, Soviet reactions to this etc. and finally brief coverage of the Soviet move on Vienna, Austria. And while there were undoubtedly Jagdpanther and SU-100 units involved in all this fighting, the book wanders far and wide in its battlefield coverage, with little directly about specific Jagdpanther and SU-100 unit actions. This battlefield history is all very interesting, and for the most part fairly well written, but it certainly wasn’t what I was expecting to dominate in a book titled “Jagdpanther vs SU-100”.

As a modeler, I am always keen to have books with good photographic coverage of the model I am building. For those with Jagdpanther and SU-100 model kits, the photos in this book aren’t very useful. Many are of only average reproductive quality, and almost all are very small in size. The majority aren’t even of Jagdpanthers and SU-100’s. There is a full two page color artwork spread in the book showing a couple of SU-100s advancing towards a Jagdpanther across an open field. I am not sure why this was used, other than to take up space to meet a publishing requirement that the book contain 80 pages? The artwork isn’t particularly useful, as it doesn’t show any details that to me seem useful to understanding either vehicle, the battles being described, or for my modeling. Being on a fold doesn’t help either.

If you have nothing in your library on the Jagdpanther or SU-100, and also happen to be interested in the Eastern Front situation in 1945 as it pertains to the battles for Hungary, then this book could be of interest to you. If you are looking for a detailed discussion of the two vehicles named in the title, especially when it comes to good photographic coverage, then you might be better looking elsewhere.

My thanks to Osprey Publishing for providing IPMS USA the opportunity to review this book.