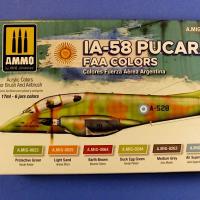 In the last year or so I have been able to try out the Ammo by Mig Jimenez paints and I’m very well impressed with them. They are sturdy and durable, nothing like other acrylic paints I have used before. When I had the opportunity to review another set of them, I jumped on it, as these paints are among the best acrylics I’ve ever used.

As you can see from the list of colors, most of the paints in this set (if not all of them) are from other sets and found to be a close match to the Pucara colors used in the Fuerza Aerea Argentina (FAA).

As an Argentinean-born modeler, I have attempted to study the Pucara. I don’t think of myself as an expert on the topic but simply an educated reader. What follows is my personal opinion on the matter of the Pucara paint colors.

The paints used by the FAA during the Falklands war varied a lot, as most of the airframes were camouflaged in the field, at times with painted sourced from the closest hardware store to the base where the planes were located. Airplanes were crossed in groups to the islands and typically they would get camouflaged while in transit (i.e being painted while in bases in Patagonia). No standarized colors -or camo patterns- were used. Even the colors used varied from crossing to crossing, as they would occur every 7-10 days and the availability of colors changed, mainly depending on which paint stock was available at the time. In some cases, the FAA crew would use whatever paint they could get their hands on, including in some cases automotive paint (from what I’ve read, from FIAT cars).

Regarding the chemical formulation of the paints, from the AMMO website, you learn that these paints are odorless, water soluble and non-toxic. All these make the paints interesting alternatives to enamels and lacquers as non-toxicity is a great thing and odorless makes the rest of the family happy.

The instructions are very clear, they tell you to shake the paint well (the little ball agitator makes it easy) and to spray in very thin coats (almost like a mist), letting the coats to dry a bit in between and to let the paint set for 24 hrs. before the next step.

In my tests, I followed those instructions. The only thing I changed was to actually blow some air (with my double action airbrush of choice, the Badger 105) in between the coats. It took a bit of practice to get it right and I needed about 4 to 7 coats to get the color density you see in the pictures. I personally like the need of several thin coats to build up the color, as that allows you to do pre-shading/blackbasing if you want to.

I have to say that I did find a very faint smell on these paints. It is not strong at all and it is not “offensive” nor headache-inducing as enamels or lacquers. The best I can describe the smell is ‘earthly’. A bit like mud or clay, from a pottery workshop.

The smell lingers on the plastic parts for several days after painting, which indicates the paint is still drying/curing or at the very least degassing. I do live in Colorado, so perhaps the high altitude played a role on the longer degassing period.

Even if the paints are curing or degassing, I was able to spray different colors -all from the same line- on top of each other without a problem, even before they were fully cured. In this review I just used a piece of paper as a mask between the color bands shown in the images and spraying the different colors happened within a minute or two from each other. I should point out that all colors were sprayed on top of a coat of “One Shot” primer which was given a full 24 hours to cure before spraying the paints.

To clean the airbrush cup in between colors first I flushed with water and then used a few drops of the Ammo Acrylic Cleaner (A.mig.2001). It took about 30 sec to do a clean up between colors. After spraying all the different colors, I took the airbrush apart and cleaned it up with a paper towel damp with the cleaner, and then I used another piece of paper towel with water for a final rinse.

I have to say that I am quite pleased with these paints. I am slowly adding them to my growing collection of acrylic paints and likely are becoming a ‘standard’ for future builds.

As per the specific colors included in this set, I suggest you try to get a picture of the specific airframe you are modeling and decide if you want to change the shade of the colors a bit.

I would like to thank AMMO by Mig Jimenez and IPMS/USA for the review sample.