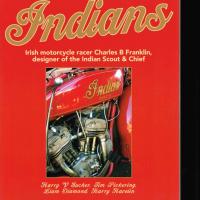 This book was first published by Panther Publishing in 2011 and Veloce Publishing Limited did a facsimile reprint in February 2018, this review is about the reprint. What we have is a biography of Charles B. Franklin, an electrical engineer, motorcycle racer, designer of Indian motorcycles and an overseer of the Indian Company racing teams. This book extensively covers the years from 1903 thru 1932 and with a wide geographic expanse well, from Ireland to Britain, then Europe and America with side excursions to Australia and back to Europe. A comprehensive account of his life and achievements to the sport of motorcycling has not been available until now.

This work is divided into two sections; the initial section is called “The First Great Irish Motorcycling Competitor” and has twelve chapters. It covers Franklin's life from his birth on Oct. 1st, 1880 in Dublin to the time in Oct. 1916 when he sails to America. Charles profession was as an electrical engineer, his passion was racing. He was an excellent racer, never flashy or taking unnecessary risks, but often placing in the top three spots. He used his electrical knowledge to insure that his machines were always perfectly tuned and had a reliable source of electrical power. Franklin was so good that the British Racing Team invited him to join them on their 1905 quest for the International Cup race on the continent, in France, Italy and Austria.

Early in 1910 Franklin acquired his first Indian motorbike which began a life long association with Indian products. In August of that year, Charles resigned his position with the Rathmines Electricity Works in Dublin to take up the post of Irish representative of the Hendee Manufacturing Co.(the makers of the Indian products as they were called at that time) He gave up a secure civil service post, a job for life, in order to open an Indian agency. That says a lot for his confidence in the Indian product.

Charles was a friend with William “Billy” Wells, who ran the Indian franchise in England and also sat on the Hendee's board of directors. While working with the Indian racing team, racing and making sure the motorbikes were in tip-top condition, Franklin and Wells often discussed ways in which improvements could be make to Indian machines. In 1913, Oscar Hedstrom (the first Hendee design engineer) resigned his position. His assistant assumed the role as design engineer, but he had no formal engineering schooling and just continued the work that Hedstrom had started. By 1916 Wells was able to convince George Hendee to appoint Charles Franklin as the design engineer before Hendee left the company. Franklin sailed over to America on November 1st, 1916.

The second section, “America Motorcycle Designer”, consists of eighteen chapter which deals with Franklin working in Springfield, MA at the Hendee's factory as the chief design engineer. His first new motorcycle design was for the Scout. This book goes into length to describe what made the Indian “Scout” different and superior to other motorcycle manufacturers. The prototype was tested in 1919 and went on the market in 1920. Sales were responsible in keeping the Hendee Company in business during the 1920-21 economic slowdown. Franklin at this time was also responsible for keeping the Indian racing team competitive with Harley-Davidson during the “racing wars” of 1919-22. He did extensive research in re-configuring the side valve heads to get superior performance out of this design that hider to was falling behind H-D bikes.

In 1922 Franklin's next design was introduced, this was the 1000cc, 61 cu.in. Indian Chief, which became the biggest seller for the 20's. Demand for more power resulted in the engine being bored out and the Indian Big Chief came on the market in 1923 at 1200cc, 74 cu.in., which even during the Depression still sold well.

During the early 20's there developed in England and Europe a rise in popularity for the 350cc or 21 cu. In side valve single cylinder motorcycles. In 1923 on one of Franklin's many trips to Europe to help the Indian racing teams, he picked up on this demand for a smaller cycle on the Continent. When back at the Hendee's factory he came up with a featherweight bike, which came to be called the Indian Prince and was marketed in 1924. The intent was to boost sales of Indian motorcycles in Europe, which was what happened. It should be noted that before and into the 1920's the market for Indian motorcycles in England and Australia was as great if not greater than sales in America, but that was to change. In 1922 the US Congress passed a series of tariffs increases on England, Europe and other countries. This started a tariff war when in the mid-20's many countries passed Tariff increases on American goods which crippled Indian sales to England and Europe. In 1920, 4305 Indian motorcycles were imported into England, by 1926 the Indian imports were down to 97 cycles, this really hurt the Hendee Company financially.

In 1928 to improve sales Franklin made a major overhaul and redesign on the Scout motorcycle, calling the new model the 101 Scout. Some of the many new changes were as follows: A front wheel brake appeared, the wheelbase was lengthened to 57 inches, the seat height was lowered to 26 inches and the slope of the frame top-tube down from the steering head to the seat post was made a graceful curve, the engine was moved forward and the gas tank became smaller and teardrop shaped. These changes created the modern appearance for motorcycles and in addition to making the ride so much better. In an effort to standardized the product lines, these changes were also applied to all of the Indian motorcycles. Sales did improve, but the Great Depression was a further blow to the company as sales fell from 4,000 cycles in 1929 to 1,600 cycles in 1933. From 1931 forward photos of Charles showed a face that was very thin and sickly looking. By the end of 1931 he took a leave of absence, but continued to work from home. Charles Franklin died on Oct.19th, 1932 at the age of 52 from bowel cancer as listed on his death certificate.

I can highly recommend this book if you are interested in Indian motorcycles, or if you want to learn more about motorcycle racing from the 1910s to the 20s in England and America. This book describes a lot of characters who where excellent racers whether they raced for themselves or raced in company teams. A excellent history of the company that built the Indian motorcycles is also unfolded for you in the pages of this book from the founding in 1902 to the early 30's. I want to give my thanks to Veloce Publishing Limited and IPMS/USA for giving be the chance to do this review.

Franklin on His First Indian Bike

Franklin with his Bike, 1906 Austria