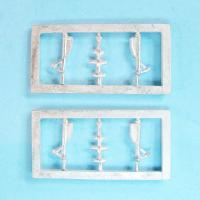 The Fokker 100 is a 100 passenger medium range airliner built by Fokker AG in the Netherlands. When it was introduced in 1987, sales were brisk, and it was a financial success. But by 1995 there were several competitors introduced, and sales were low. Fokker had to declare bankruptcy. They were bought by Deutsche Aerospace AG, but they also had financial problems, and production was ended in 1996. Most have been retired, but there are still a number flying in Australia and Iran.

The Revell kit was introduced in 1996, and has been re-released in 1996 and 2005 with new decals. There are also several aftermarket decal sets available for this kit.

You get two sets of gear parts in this set. This is very handy, because I have another Fokker 100 in my stash. The parts are all white metal, and they fit nicely in place of the kit parts.

In this case, all of the gear legs were the same gray as the underside of the Swissair plane. Easy to paint.

The Revell kit went together pretty well, considering it’s now 25 years old. The biggest problem I had was that whoever sold me the kit, probably at a swap meet, didn’t include the instructions. Fine, I had another kit, but there were some differences, and the markings instructions were totally different. The Revell decals were fragile, and the long stripes broke several times.

The SAC parts were far better than the decals. I was able to put the wheels on and install the gear without a problem. I then added the gear doors, and the project was finished.

Very highly recommended. The SAC metal parts are much more robust than the kit parts, and more immune to problems caused by handling the kit after construction and during movement or display.

Thanks to Scale Aircraft Conversions for providing the aftermarket parts and IPMS/USA for giving me the incentive to do a kit which was just sitting in the stash.