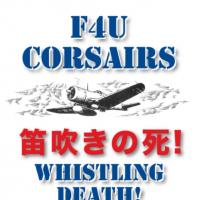 Originally conceived and developed as a carrier-based fighter for the United States Navy, the F4U Corsair was initially adopted by the US Marine Corps as a dependable and extremely lethal land-based fighter-bomber. The Corsair’s unique and innovative configuration incorporated engine oil coolers in the inboard wing sections, with the resulting airflow through them making an unmistakable whistling sound, audible over the sound of the engine and firing of its guns. So predominant and unnerving was this sound to the Japanese forces on the receiving end of Corsair wrath that they dubbed the Corsair “Whistling Death.” Designed and manufactured by Chance Vought under the designation F4U and license built by Goodyear as FG-1, Corsairs became the staple of Marine Corps fighter units in the Pacific Theatre from 1942 until the end of World War II in 1945. Rugged, fast, dependable, and robustly armed, Corsairs continued service as fighter-bombers into the jet age through the Korean War.

To the delight of Marine Corps Corsair aficionados, FunDekals packs its new 1/32 sheet, “Whistling Death” with markings for 16 distinct F4U-1A, FG-1A, and F4U-1D aircraft as follows:

A 49-page marking guide and supporting references are provided in a full-color online document which not only aides in marking placement, but provides fascinating background information about the aircraft, units, and deployment scenarios.

Printed primarily in white, the images are crisp and clear with sharp register.

Although not able to get the sample on a finished Corsair, an example was evaluated on a testbed model with a dark glossy finish maintained for just such purposes. The sample decals were very thin and responded well to initial positioning and subsequent repositioning. The Microscale system was used in their application and they responded well to both Micro Set and Micro Sol. There was no evidence of poor adhesion or silvering at any point.

FunDekals “Whistling Death” 1/32 scale sheet is a great aftermarket pick-up for any modeler wanting to build an accurate USMC F4U-1A, FG-1A, or F4U-1D from the final two years of Pacific island-hopping. I like this sheet and subject matter so much, that it is serving as a catalyst to get my Tamiya F4U-1A and vintage Revell F4U-1A out of the stash and onto the bench. This sheet is Highly Recommended.

Thanks to FunDekals and IMPS/USA for the sample sheet, the opportunity to review it, and the much-needed nudge to get a couple of kits out of the stash and on to the workbench!