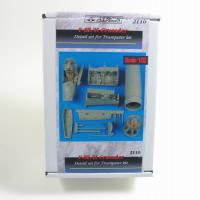 The F-8 Crusader has always been one of my favorite aircraft. I personally tend to model in 1/48 scale, however when the opportunity came up to review Aires 1/32 detail set for the Trumpeter F-8E/H, I could not resist. The set showed up, and I found an F-8 kit with a few other goodies shortly after, so I was all set.

Aires has always been a leader in the realm of aftermarket resin sets. I am used to their 1/48 line and the level of detail found on those, but was blown away with their treatment in 1/32. First, the set is large, and comes in a sturdy cardboard box with lid and clear picture of the contents. Opening the box you are greeted with several bags of large resin parts, a small photo-etch fret, and instructions.

The main areas covered by this set are:

For the cockpit you get eight parts, which include the tub, MB Mk5 Ejection Seat, coaming, cockpit sides, interior canopy frame, and the grip for the control column. You may think that eight parts is a pretty low count, however remember that in this large scale many parts can be cast together instead of being separate. So for instance the throttle lever is cast with the cockpit tub. There are also a few photoetch items, such as seat belts, that get added. Detail on the castings is top notch, with far more detailed than what is provided in the kit. However the oxygen tank behind the canopy is not included, though it can barely be seen once the canopy is on anyway. Another issue is more about the label of the set vs. the casting itself. The box is labeled for an “E or H”, however the H models came from rebuilt D models, and had a round radar scope and slightly different instrument layout. The castings in this set have the square scope, thus are fine for an E model (and J also, which was produced from remanufactured E’s)

The refueling probe and bay are completely replaced with new resin parts. The bay is a drop fit into the fuselage and assembly will show if the resin casting plug needs to be removed. I don’t think it will be necessary. The parts that make up the probe are flawlessly cast, and greatly improve the detail and shape of the probe vs. what is provided in the kit. A new refueling bay door is also included. A simple assembly looking like it won’t take but an hour or so time to put together.

The next area is the landing gear bays. The main bay is cast as one piece and is almost a drop in fit. A little minor tweaking of some of the kit internal structure will be needed, but nothing that looks complicated or time consuming. New linkages are also provided in resin. The front bay looks like it will require a little shaping of the kit opening, and removal of the resin pour plug, but that should be fairly easy with a razor saw. New front bay doors are included, as is the Y section of the forward landing gear, complete with opened lightening holes.

The final details covered in this set are the afterburner can and exhaust nozzle. The resin parts that Aires provides cause the kit parts to pale in comparison. The nozzle itself is a work of art, with pedals complete with full detail and texture, which the kit lacks completely. The can itself has detail all the way back to the engine, and the rear of the engine is replaced with a new, better shaped, resin and photo-etch parts. All of this combined will make for an exhaust area worthy of looking down into! With the can being over three inches long, an airbrush will be required to paint the interior.

This set really does dress up the Trumpeter kit. Everything here is available as separate items through Aires, so if you don’t want to go with the full set, then you can grab the items you feel needed. However the complete detail set is a great value for what you get and will set your model apart from the other F-8 kits on the table. I’m really looking forward to getting these installed and building my F-8E. Now I just have to decide what markings! Stay tuned…

Thanks to IPMS USA and Aires for the review sample!