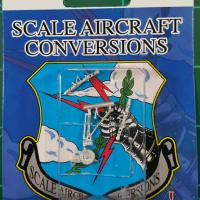 Scale Aircraft Conversions is known for making replacement landing gear for a wide variety of kits in virtually every scale in which model aircraft are available. This set is designed to replace the plastic gear in the Academy and Italeri F-84E/G kits. I think with a bit of work it could be used on the Tamiya kit.

The set includes both main gear legs and the nose gear made in one piece with the nose wheel. The struts are very sturdy and are made to be drop-in replacements for the kit parts. The parts require very little clean up, though some parts do occasionally become a bit bent during shipping. No worries there, though, since they are very easily straightened. Recommended, especially after you’ve added a bit of weight to make sure your Thunderjet isn’t a tail sitter. The nose gear being metal will help with providing enough weight, which is a bit difficult with the nose intake.