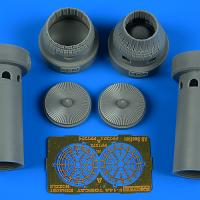 This set is designed to be used on Academy’s new F-14A Tomcat kit. The set consists of 6 resin parts and 2 photo-etched parts which allows you to assemble a pair of exhaust nozzles for the kit. Each nozzle assembly is comprised of a section with the rearmost fan blades, the flame-holder for the afterburner, the exhaust pipe and the exhaust nozzle. As noted in the title, the nozzles are varied, one is fully opened and one is fully closed, shore-based Tomcats normally appear in this configuration.

The parts are cast in Aires standard grey resin which is easily cut with a razor saw and sands well. After washing the resin parts to remove any casting residue, I used a fine razor saw to separate the parts from the casting blocks. The instructions clearly show where to cut the parts from the casting blocks. I used a fine razor saw and then cleaned up the cuts by sanding the parts on a piece of sandpaper attached to a piece of glass from an old picture frame, as this helps me keep the edges flat/straight. As shown in the photographs, the open nozzle of my set was missing a chunk of the nozzle feathers, but in looking at photographs, I noted that this row of feathers does not show, so I sanded off the rest of the row to even things up.

While all of the resin parts have round cross sections, the casting process allows each piece to be cast in a single piece, rather than halves like most injection molded kits, so there is no seam to detract from the interior details.

Once everything had been separated from the casting blocks, the next step was to paint the individual parts. I painted the rear fan blades steel with a black wash to help the individual blades pop out. The photoetch flame holder was also painted steel, but I weathered it with by lightly spraying portions of it with NATO Black and Jet Exhaust. The exhaust tubes were painted white inside with streaks of NATO Black. Based on the Academy instructions, I painted the nozzles themselves Burnt Iron, but in hindsight, I think this color is much too dark.

Aires’ direction are not clear as to which end of the exhaust tubes is which, but in examining them, I noted one end has a slight lip a little way inside and in test fitting the flame-holders, I discovered that they fit right up against this lip. I was initially surprised to discover that the fan blades are the same diameter as the exhaust tube, such that I ended up gluing the tubes directly to the blades. However, when I flipped the assembly around and looked at it from the other end, this made sense as it results in the flame-holder sitting proud of the blades, as it is supposed to.

While this set is designed to replace the kit nozzles and exhaust assemblies, it is not a drop-in replacement. You will need to install the Aires parts much earlier in the assembly sequence as, unlike the kit parts, the Aires exhaust tubes are not tapered and will not slide into the fuselage after it has been assembled because they are wider than the kit parts and the openings. As shown in the instructions, the Aires exhaust tubes need to be glued inside the openings for the exhausts before you close the fuselage. The nozzles are then glued to the end of the kit openings. I received the review set after I had completed assembling the fuselage of the kit, so I have set them aside for my next build of the kit.

This set adds some nice detail to the exhausts for the Academy F-14A and will look really nice installed, however, you will need to have it on hand when you start building the kit so that the exhaust tubes can be installed prior closing up the fuselage.

Highly recommended. Thank you to Aires Hobby Models for the review sample and to IMPS-USA for the opportunity to try it out.