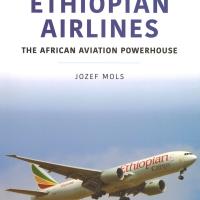 The book takes you from the humble beginning of The Ethiopian Airline to the present. The book is divided into 11 chapters with three appendices, as well as an introduction. The introduction provides the reader with a small history of the country from around 8 BC to the present. The first chapter deals with the early beginnings of the airline, and mainly focuses on the individuals that were instrumental for the creation of the Ethiopian Airlines. The airline starts in 1929 with France delivering several Potez 25 to the country. Not to be outdone the Germany brought 2 aircrafts at the same time. Yet, it was the Germans that were the first ones to organize mail delivery, as well as money and people throughout the country.

The second chapter gives us the starting point for the airline which was developed with American help. The first international flight of the airline was from Addis Abba to Cairo and the crew was American. The fleet consisted mostly of DC-3's and C-47 that would serve the airline for nearly 40 years. The chapter also talks about the expansion of the EAL (Ethiopian Airline) through the early years. It should be noted that the first Ethiopian captain flew in 1957. At this time further airplanes were ordered to improve service and accommodate demand.

The third chapter is mostly political as it talks about "profit and taxes" in a Marxist country. It is interesting the fleet consisted of American planes such as Boeing 737; 757 and 767, as well as Lockheed Hercules, DH Canada Buffalo and Fokker 50. Ethiopia was a Marxist/Communist country at one time, but did not use Russian aircraft. They used, American planes to train their pilots. This case the Cessna 172. I found noteworthy as most Marxist/Communist countries are "encouraged" to buy Russian aircrafts. Chapter fourth introduces us to the expansion of the airline during the early days of 21st Century. The airline bought, again, Boeings planes. They also added several Dash Q400 and leased MD's 11. The company added a repair facility at this time, as well as an academy to teach other African pilots and crew members.

Chapter five brings us to the jet age. The first jet was the Boeing-720B. The fleet progressed to Boeings 707's; Boeing's 727, 777, as well as other models such as the Twin Otter and the ATR-42. In addition, maintenance shops and flight schools were created. Chapter six introduces us to the vison of the airline as it is for the years to come. It mostly inform us of what the airline plans to do with their fleet, personnel and maintenance areas, as well as cooperation with other airlines and route expansion.

The last three chapters talk about the future of the airline, as well as the plans they have to accomplish this goal. This includes such things as instruction of foreign personnel, both pilots and crews and increasing the routes they serve. Chapter ten introduces us to the incident in which a Boeing 737-Max crash-landed and the aftermath of the incident and its consequences to the airline. After the Boeing 737-Max was cleared to fly again, the airline stated that they would fly the bird again, but they will not be the first to do such as confidence in the plane was very poor.

The last chapter talks about the COVID-19 Pandemic and the effects of it on flying and the customers reaction to the problem. The EAL changed their focus from passenger transportation to cargo and as thus is weathering the pandemic.

Appendix One reports all the incidents. Accidents that airline has had from 06/1948 through 06/2020. Appendix Two gives us each and every aircraft the EAL has had since its creation in 1946 to the present. Appendix Three pertains to the Notes and References for the book.

I enjoyed the book very much, but like the author I have a soft spot for Ethiopia as I spent 6 months there in 1993 with the International Red Cross and met the people and visit many places, yes I used EAL to go to several of the provinces on business. On the other hand, although the book has many color photos, I would have loved to see some profiles of the early planes used by the EAL, as well as some of the present planes. I would like to thank Casemate Publishers and Key Books for the opportunity of reviewing the book.