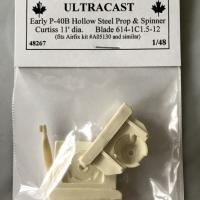 The Curtiss P-40 Warhawk is an American single-engine, single-seat, all-metal fighter and ground-attack aircraft that first flew in 1938. The P-40 design was a modification of the previous Curtiss P-36 Hawk which reduced development time and enabled a rapid entry into production and operational service. The Warhawk was used by most Allied powers during World War II, and remained in frontline service until the end of the war. It was the third most-produced American fighter, after the P-51 and P-47; by November 1944, when production of the P-40 ceased, 13,738 had been built, all at Curtiss-Wright Corporation's main production facilities at Buffalo, New York.

Recently I was given the opportunity by IPMS USA to review Ultracast Early P-40B Hollow Steel Prop & Spinner Curtiss 11' dia, Blade 614-1C1.5-12 for the Airfix P-40B Warhawk kits. One of the first things to notice with this product is the nice presentation of the packaging with the Ziploc seal to allow for easy access to parts.

The molding on the resin prop and spinner is exquisite and very easy to remove from resin block and are a direct replacement for the ones that come in the kit. You will notice the main differences between the kit supplied prop and spinner is that the Airfix blades are noticeably narrower than the resin ones, which also have more detail, plus the fit is excellent. These is a definite improvement and more realistic width of the blades compared to the actual aircraft.

Overall I’m well pleased with what I have seen from Ultracast in their offerings so far for the Airfix P-40B. This early prop and spinner will definitely make your Warhawk more presentable and realistic when the build is finished. I would like to thank Ultracast and IPMSUSA for the opportunity to review this item.