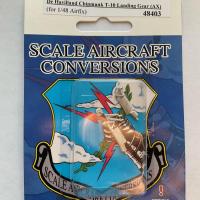 The Chipmunk was a Canadian design that satisfied the need for a post WWII primary trainer to replace the outdated Tiger Moth and other trainers like it. First flown in November 1946, it went on to become the standard primary trainer for the RCAF and RAF. Most famous in civilian hands was the “Super Chipmunk”, flown by aerobatic legend Art Scholl. I have a personal connection to the Chipmunk as my grandfather, a flight instructor at the Montreal Flying Club, taught many a pilot to fly in what he described as a beautiful flying aircraft.

SAC has provided a white metal set for the Airfix T.MK10 kit. This was the standard RAF version of the Chipmunk of which 755 were built. Per SACs usual process, these parts are a reproduction of the kit parts in white metal. Two main gear legs and the tailwheel are included. I did not have the base kit to compare these to but based on numerous projects I’ve used these parts on, if the kit parts fit, these will to. There is a little prep required since the parts have a texture that may or may not have been on the original aircraft parts. Luckily, the metal used by SAC is easy to polish out. I’ve always been a fan of these sets because any drilled holes just look sharper on the SAC product than those drilled into plastic parts, and the oleos polish to a shiny finish.

This set is a simple upgrade that will take your Chipmunk up a notch. Thank you to SAC for the review sample and IPMS for sending this set for my pending build.