Curtiss P-40 B/C US Version Browning .30 cal and Pitot Tube 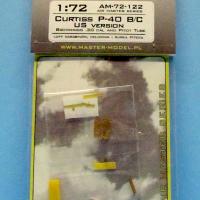 There are many firms who make and market brass aircraft accessories for the modeler, but none seem to match the skill and delicacy that is routinely exhibited by Master Model from Poland. One of the latest gems is the set for the Curtiss P-40 B/C US version in 1/72 scale. In this set one gets the following: four .30 cal MG barrels for the wings, two .50 cal cowling blast tubes, one pitot tube, two resin pitot heads, one front bead sight, and four photoetch rear ring sights. Master-Model does not recommend any one P-40 kit so for this review, so I used the latest Airfix kit the Curtiss Hawk 81-A-2 which I had.

Master Model packaging is very good as it has to be with the tiny, delicate parts they provide. A plastic bag has the above mentioned items in that order, each sealed from the others, so you only need to open one section to work on those parts and not worry about losing any other items in the process. This bag is placed in a zip-locked bag with a cardboard backing and instruction sheet to add another layer of protection. This instruction sheet is detailed with drawings and gives you location and hole sizes. The only quibble I have is that the dimensions are in metric and not English system, but you really can't blame Master Model as 99.8% of the world uses metric. I converted the metric dimensions to English system by multiplying the metric figure by .03937 which results in the figures in inches. I then could check my numbered drill set to see what sizes I needed.

I first installed the wing guns. In the Airfix kit the gun barrels are attached to the upper wing molding and grooves are in the leading edge of the lower wing to accept the gun barrels. I used a #4 needle file to make the grooves in the upper wing after the plastic gun barrels had been cut off. For this review I taped the upper and lower wing halves together, then using white PVA glue I installed the brass gun barrels using the instruction sheet that tells you that the barrels protrude .197 inches from the wing's leading edge. The details on these brass gun barrels are hard to see, with these old eyes, but under magnification you'll see depressions that represent the cooling holes and at the tip varying diameters that neck down. Hard to describe so I would recommend that you go to their website: www.master-model.pl and check out the photos on this set. To show you how small these brass barrels are they mike out at 0.024 inches in diameter. Now while I have the wings taped together I decided to attach the pitot tube, which is the U.S. version. It doesn't belong on the Curtiss Hawk 81-A-2 but for this review it doesn't matter. Airfix wing has a pre-existing hole for a plastic pitot tube, so one doesn't have to make it. The brass pitot tube provided is only 0.017 inches in diameter and the hole is larger than that. I used some thick white PVA glue to attach the tube. Follow the instruction sheet as it shows how far the pitot tube goes into the wing. After the white glue had hardened I used some CA to attach the resin pitot head to the tube. Master Model provides two resin pitot heads, and at being rather small that's a comfort if one is lost to the carpet monster.

The next items on the agenda are the cowling .50 cal blast tubes. The instruction sheet shows two options: one long tube and one short tube. You'll have to check your photo references to decide on which version to use. The long version was used initially to protect the upper cowling from the .50 cal blast, but later was shortened and as noted by Master Model a bevel cut was made to try the keep the blast impact to a minimum. Master Model provides two brass tubes, on each tube at one end is a straight cut so this faces forward on the long barrel use. This same brass tube at the other end has a beveled end and faces forward on the short barrel, but you will have to cut the brass tube short to fit into the hole you'll have made in the plastic. The other option not mentioned was that in the period before WWII (late 30's and early 40's) a lot of time the Army Air Corps planes flew without guns in them, so no blast tubes, no wing guns. I've gone over several books I have on the P-40 and it's more common than not to have the guns not installed. Now what model maker would want to build a fighter and not install guns. These brass blast tubes are 0.027 inches in diameter and require a # 69 drill. I started with a smaller drill to make the initial hole then used the # 69 drill. Go slow and watch out especially at the sides as this drill does leave you with very thin sidewalls with the Airfix kit, other kits may vary but be careful. I used the long barrel approach. I failed to mention at the start of this paragraph that I taped the Airfix fuselage halves together and then taped the cowling part onto the upper forward fuselage.

The last parts are the front sights that sit outside on the fuselage. The instructions call for a .012 inch hole, but not having a # 81 drill I used a # 80 drill which makes a .013 inch hole.

Using the instruction sheet, two holes were drilled 0.060 inches right of center looking from above, the rear hole just in front of the windshield, and the front hole just back from a panel line. The rear sights were made using photoetch so I sniped out one rear sight and cleaned it up. Using white PVA glue I then inserted into the rear hole. Then I picked up the tiny front bead sight and likewise secured it into the forward hole with white PVA glue. This is a remarkable piece, it has a bead at one end that sits on top of a tapered shaft that ends at a ring. The bead sight is 0.007 inches thick at its widest and just over .125 inches in length. You are only provided with one so be very careful that you don't lose it. That completes all the parts and they really are some remarkable pieces. I can't see how they make some of these parts unless Master Model uses CN lathes to do this work.

I can very highly recommend this set at adding wonderful detailing to any P-40 to P-40B/C kits. I want to thank Master Model and IPMS/USA for giving me the opportunity to review this set.

Wing gun barrels installed side view - look at that detail

Pitot head and tube
Previous Next