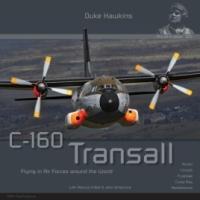 The C-160 Transall is a twin engine transport aircraft conceived and built by a French and German alliance. It is about the same size as the Lockheed C-130 but uses two high powered Roll Royce engines as opposed to the C-130s four smaller engines. The Transall is slowly being fazed out and replaced by the larger Airbus A-400 Atlas.

This soft cover book is made using high quality paper and is superbly put together. It shows the aircraft in its various air force colors, variants and an extensive pictorial excursion around it. There are hundreds of beautifully detailed photographs of every part of the Transall, from close ups to action shots of the aircraft on the ground and flying.

The reader of this book is taken on a “walk around” of the subject aircraft in pictorial form and each picture, or series of pictures includes a brief, but detailed explanation of what we are looking at. The book starts with an introduction and history of the Transall, followed by a few pages on the different variants produced and Air Forces that flew them.

As the pages are turned, the aircraft sections are presented in a logical format and a plethora of color photos.

The fuselage is broken down into the forward, the center and then rear fuselage sections. Pictures include the nose, steps, exits, Cargo doors, APU, electrical plugs and much more.

The wings follow and here we see the structure, flaps, spoilers, engines and propellors.

Three pages are dedicated to the Transall C-160 Gabriel, a signal intelligence platform. This type saw extensive, yet unsung, action in the first Gulf War. The cargo bay was modified to accommodate 12 operators and their electronic equipment.

A wander forward through the cockpit is next and nothing is missed, from all the consoles, panels, seats and stairs leading to it.

The wheels roll in and show the hefty nose and main undercarriage. The size and strength of the gear is impressive, needing to be strong enough to land on any sorts of prepared and unprepared airstrips.

Heading to the rear of the aircraft, the tail and tailplanes are covered and their associated parts.

From peering up at the Empennage, the reader turns forward and is taken up the rear ramp and inside for a tour of the cargo bay and loading ramp. Pictures detail every part of the internal airframe, plumbing and wiring, walls, floor and ceiling.

Aircraft maintenance and a detailed look at the engines and propellors are covered in a walk through the hanger.

As this is a military aircraft, it is only appropriate that it would include defensive systems, and we are shown what counter measures were installed. This varied from air force to air force.

The last section of this book covers the action side of the Transall. It shows the aircraft in all its various air force liveries, varied states of wear and tear of years of operating in many different environments and special anniversary and retirement schemes.

The last page is a dedication by the author, Duke Hawkins and his contribution to the book. He mentions that while there are fantastic aircraft that other editors would concentrate on, the Transall is more than worthy of having a book dedicated to it. Duke concludes with recognizing important people who helped with pictures and information.

As I have the Revell 1/72 scale C-190 Transall in my model stash, I found this to be a fantastic and valuable reference to use when I build that model. It is even nice enough to be used on a coffee table in the living room. I would highly recommend this and other books in this series to anyone, modeler or enthusiast, who is interested in this aircraft.

Thank you to Casemates, HMH Publications and the guys at the IPMS USA for enabling me to review and enjoy this book.