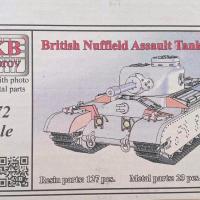 The second of eighteen different designs for an assault tank to break through enemy defensive lines. The designs were completed by May 15, 1943. No prototypes were built, but the project helped to set the stage for another heavy assault tank, the A39 Tortoise.

The kit comes in a sturdy flip top box with the computer created illustration of the model on the top. The parts come in several bags to keep everything, more or less, protected when shipped.

The gray resin is extremely well made, no bubbles, no warps, no short shots. It breaks from the stubs cleanly for small parts and the resin is not too hard to cut for the larger parts. I did not make a count of parts but I did notice, during the build, that I was missing pieces. I only had one set of two of part 12. when I was trying to figure out how to install the geared wheel (part 34) there weren't enough of part 12s to sandwich the gear between the hull and the track shield (20). I did, however, have two extra sets of part 38/39, I shaved down the wheel so that the nub acted as part 12. It looks OK, but it would have been nice to have the correct part in the first place.

When I put the hull together I had to figure out which end went where at first, but I noticed that there were marks where the return rollers were supposed to be placed. Some of them were bisected by the break in the hull, this allowed, at least, a reference on how things were to be put together, since there were no directions given by the piece of paper provided with the kit.

The illustrations, you can't call them directions, allow you to visualize the parts AFTER you make the mistake of putting glue to resin. I made many a mistake, but was able to break the super glue easily and cleanly to make my repairs. Maybe it was a good thing I did not wash the parts before assembly.

When placing the torsion bar suspension together, I wanted long pegs to ensure that I had a good anchor to the hull. To do this, I cut the suspension long at the insertion end from the pour plugs, and drilled holes into the hull to accept the longer parts. But, as I said when describing then resin, the parts detach rather cleanly. The I broke enough of the long pegs at the original length that it did not matter. I had to be careful to not break the torsion bars when building the rest of the hull.

Everything else went together rather cleanly including the tracks. The tracks are beautiful. They bend easily once you place them in hot water, they drape cleanly (if you put the wheels together correctly), and hold their new shape like a charm. No wonder people by OKB Grigorov tracks, they perform very well.

Once everything was glued (and hammered) together I sprayed a car primer over everything, let it dry, then painted the tank a bronze green from Mission Models. The model did not come with decals so I put Canadian tank decals from Peddinghaus, and weathered. Unfortunately, I think I overdid it. My experiences in the fields of Germany remind me of muddy fields and rain. Oh well, hope you like it.

I like to thank OKB Grigorov and IPMS USA for the opportunity to build and review this kit.