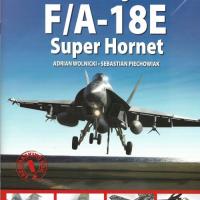 The F/A-18E Super Hornet is the US Navy’s truly ubiquitous aircraft. It’s their main fighter and attack platform as well as its electronic warfare aircraft, the E/A-18G Growler. Model manufactures followed the Navy’s lead and have produced numerous kits of this aircraft in all the popular scales. Consequently, Kagero recently released a publication in their “Kit Build” series about this fighter. The paperback chronicles model builds of two Super Hornet kits: Academy’s 1/72 scale and Eduard’s 1/48 scale F/A-18E’s. Color photos document progress of the build while short paragraphs of text offer further explanations. The last four pages of the book contain eight color profiles of “E” and “F” versions - four apiece. As a bonus, a small masking sheet for the canopies of 1/72 and 1/48 models is included in the book. The publication is divided into two equal parts with the first half dedicated to the 1/72 build by Adrian Wolnicki and the second to the 1/48 build by Sebastian Piechowialk. It is further divided by language: text is in English first then followed immediately by Polish.

First, Wolnicki briefly describes his kit, Academy’s 1/72 F/A-18E (12565) and notes the resin and photo-etched aftermarket products he will use. Since this is a relatively straight-forward build, he states he will concentrate more on painting the model. At each step, Wolnicki shows the paints he uses (Alclad, AK, Mig, etc.) and the various techniques to apply them. Weathering is a big part of this build as the author replicates a worn, operational machine. Again, he shows the products he used. There are several photos of the finished model and you can see he definitely achieves his weathering goal. He produces an excellent model.

In the 1/48 scale section, Piechowiak builds Eduard’s F/A -18E (11129). Though he follows the same format as in the first half, he takes a slightly different approach by concentrating a little more on the actual construction. He goes through the initial assembly steps starting with the cockpit, then the intakes, and finally the gear bays. Piechowiak additionally shows the aftermarket products he added for more detail. Comments about painting these sections are secondary to the build. When the model is assembled, he then concentrates on the painting and weathering. He shows several techniques and the products he employs to achieve a slightly weathered look. The various external stores which were resin aftermarket products also receive attention regarding their painting and weathering. Overall, he also produces an awesome model.

I have several Kagero publications in my library and I have always enjoyed them since they provided a lot of relevant information via text, pictures, drawings, etc. This is my first exposure to the “Kit Build” series and I have to keep that in perspective. This publication has a definite “magazine” feel because of its size, page layout, and photos with descriptions near them. I was inspired by the two builds and learned a little from each section. Both models are really well done. Also, I used the 1/72 mask on my Revell F/A-18E and it was easy to apply and worked perfectly.

However, I do have some issues keeping me from giving a hearty, “must have” recommendation. Here they are: several pages in each section (about 10) are filled with large photos of the completed models taken at slightly different angles. This felt very repetitive. The four pages of eight profiles didn’t really grab me as they showed rather plain, generic markings. Finally, the information and photos do not come cheaply - $24.95. I would recommend this publication to those of you interested in the late model Super Hornet, but with the aforementioned reservations.

My thanks to Casemate Publishers for providing this publication and IPMS USA for the chance to review it.