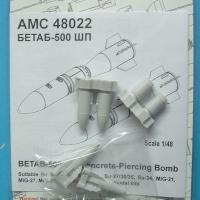 A new manufacturer from Russia has come on the scene to offer perhaps the widest range of munitions than we have seen so far on the market – Advanced Modeling (AM). Multi-media kits with cleanly cast in gray, durable resin; the detail is superb. The casting are so well done that I could see faintly detect lathe marks when the masters were turned.

This particular set provides a pair of concrete piercing bombs, the kind the Warsaw Pact would have used in low level strike to damage NATO airfields, bunkers or critical infrastructure. This is the first time I have seen this weapon available. A little research turned up these bombs being used in Syria. What AM provides is a bomb, cast in three parts with a PE base plate and a small decal sheet. The thruster nozzles and engraved details are superb.

They key to the assembly is to ensure clean, straight cuts so the components fit well. Removal was easy, without work of chipping and breakage. Around the fins, I chose to remove the pour stub first and then clip away the excess resin with sprue nippers. I cleaned up the resin with a few swipes of a sanding stick. He fit was good in assembly. The only issue is that the PE base plates are slightly larger in diameter than the resin bodies, no doubt due to resin shrinkage. I used CA to attach the PE and fairing it in with Mr. Surfacer 500. To paint the weapon, I did no preparatory work. The instructions do not call out a color, so I used a color called out on another weapon. I sprayed the bombs Model Master Aircraft Gray FS26473, which is glossy. Once dry, I applied the decals without issue; they were easy to work for such small markings and settled down with Micro Sol. I sealed the decals with Future and then applied a flat coat of Testors Dullcoat. A black wash was used to highlight the details.

Overall it was a very pleasant and relatively fast modeling exercise. I am excited to have these weapons to hang on my Mig-27 in late 1980s Soviet markings. The AM instructions list the aircraft types which carried this weapon. A great little enhancement, which I highly recommend.