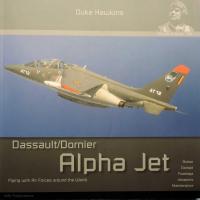 In my stash are a couple of old ESCI 1/48 Dassault/Dornier Alpha Jets along with the newer Kinetic issue. The Alpha Jet is a beautiful aircraft reminiscent of a dolphin in mid-air, having launched from the water in a playful breach of the surface. The craft was developed as a European trainer jointly by France and Germany. It was perfectly suited for that mission: forgiving, fast, agile and excellent overall vision from the cockpit. The type has served for over 40 years in the training role. Germany used the type as a close support platform. France still uses the Alpha Jet for their colorful demonstration team (Patrouille de France) aircraft, as does Portugal (Asas de Portugal). The Alpha Jet was also used by QinetiQ in the UK by the Test Pilots School, and Top Aces, the German based contract adversary company.

Alpha Jets have used by several other nations as the primary and advanced trainer platforms, as well as light attack and CAS roles for their Air Force pilots. Among those air forces are those from Belgium, Egypt, Morrocco, Ivory Coast, Nigeria, Cameroon and Togo, Thailand and others. For the modeler, the Alpha Jet represents a blank canvas for a multitude of colorful camouflage and markings. I have the excellent decal sheet from Caracal (48044) that would take care of all three of these kits. I also own three other Duke Hawkins HMH reference books. For that reason, I was eager to review this excellent reference offered by Casemate Publishers.

This 114 page paperback provides the modeler with a fully-packed and detailed reference photo book on the type. It features 280 walk-around, in flight and specific component photographs of this nimble little jet. The many photos of actual cockpit details and exterior profiles and components will provide good modelling reference. There are outstanding in flight photos of the liveries used by Top Aces, QinetiQ, the Belgian Airforce, the French Air Force (Armee De L’air), the Patrouille de France, the Portuguese Air Force, and the Asas de Portugal.

My only negative comment regarding the book is that I wish it included some photos of the aircraft in Luftwaffe service.

Thanks to IPMS and Casemate Publishing for the opportunity to review this publication.

I too have that old ESCI kit of the Alpha Jet and it would be nice to have some reference material at hand, also good to know that there is an aftermarket decal sheet for the Alpha Jet because as one who has dealt with ESCI kits today knows the decals to not age well at all! Caracal, I'll look them up!