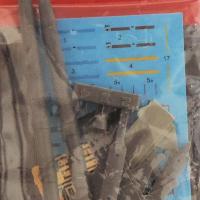 Brengun has produced a set of two AGM-88 HARM missiles for any appropriate1/48 scale aircraft kit.

The AGM-88 HARM (High-speed Anti-Radiation Missile) is a tactical, air-to-surface anti-radiation missile designed to home in on electronic transmissions coming from surface-to-air radar systems. It was originally developed by Texas Instruments as a replacement for the AGM-45 Shrike and AGM-78 Standard ARM system. Production was later taken over by Raytheon Corporation when it purchased the defense production business of Texas Instruments. The AGM-88 can detect, attack and destroy a radar antenna or transmitter with minimal aircrew input. The proportional guidance system that homes in on enemy radar emissions has a fixed antenna and seeker head in the missile's nose. A smokeless, solid-propellant, booster-sustainer rocket motor propels the missile at speeds over Mach 2.0. The HARM missile was a program led by the U.S. Navy, and it was first carried by the A-6E, A-7, and F/A-18A/B aircraft, and then it equipped the EA-6B aircraft. RDT&E for use on the F-14 aircraft was begun, but not completed. The U.S. Air Force (USAF) put the HARM onto the F-4G Wild Weasel aircraft, and later on specialized F-16s equipped with the HARM Targeting System (HTS). The HTS pod, used by the USAF only, allows F-16s to detect and automatically target radar systems with HARMs instead of relying on the missile's sensors alone. *

The plastic pouch contains six resin blocks for the missile bodies, fins, nose covers and launch rails. Also included are a photo etch fret for the RBF tags and nose cover retainers. A simple graphic detail instruction sheet is included, but any modeler familiar with resin parts will have no issues assembling and installing these resin missiles. A close-up evaluation of the parts (see photos) indicates a simple cut and replace installation that provides realistic scale-detail with significantly improved appearance to molded plastic kit parts. The Brengun missiles have superior detail to those supplied in the Hasegawa Weapons kit.

Some cautionary advice: for those without basic modeling experience, use CA (“super-glue”) sparingly, to assemble and/or attach these parts to your plastic kit, as the usual plastic glues do not react with resin parts. Painting of the parts will be necessary, so check your references, and be sure to prime with the appropriate materials that are compatible with your preferred paints.

Overall, this is an excellent replacement set that will lend increased realism to any 1/48 AGM-88 HARM delivery platform aircraft. These sets can be purchased at the Brengun website above.

Thanks to the IPMS Reviewer Corps and Brengun for the opportunity to review this item.