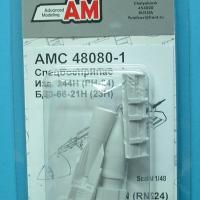 A new manufacturer from Russia has come on the scene to offer perhaps the widest range of munitions than we have seen so far on the market – Advanced Modeling (AM). Multi-media kits with cleanly cast in gray, durable resin the detail is superb. The casting are so well done that I could see faintly detect lathe marks when the masters were turned.

This particular set provides a chilling yet exciting option, a tactical nuclear weapon, in this case a Soviet “silver bullet”. This is not the kind of weapon that you will find much information and certainly no period photos of the weapon hung from a jet. What AM provides is a single bomb, cast in two parts with a separately cast adapter mount. Plus you get a small decal sheet for the few marking carried.

Assembly was rather straight forward. Remove the halves from the pour stabs and assemble. Removal was easy, without work of chipping and breakage. Around the fins, I chose to remove the pour stub first and then clip away the excess resin with sprue nippers. I cleaned up the resin with a few swipes of a sanding stick. Assembly was simple and the fit good; I used CA. Museum photos online confirm the paint scheme in the instructions – silver with a tan nose cap. To paint the weapon, I did no preparatory work I just sprayed the bomb with Floquil Old Silver. Since I usually have bad luck masking complex shapes, I chose to paint the nose by hand with Model Master Panzer Interior Buff. Once dry I applied the few marking without issue, they were easy to work for such small markings and settled down with Micro Sol. I sealed the decals with Future and then applied a black wash to highlight the details. More decals are included than used on the bomb, and they look to be storage crate (not included) stencils

Overall it was a very pleasant and relatively fast modeling exercise. It is a nice replica of an important subject based on the photos I saw. Now I have to decide which aircraft to hang it on. Foresightedly the AM instructions list the aircraft types which carried this weapon, a list I have not been able to find elsewhere. A great little enhancement which I highly recommend.

Actual Weapon on Display
Previous Next