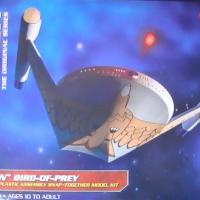 The original Star Trek TV series, in the 1960s, set the stage for TV science fiction drama in many, many ways - too many to go into here. Suffice it to say, that TV show, while great science fiction on the surface, hit all of the major political topics of the time including the Cold War between the United States and the Soviet Union. In one particular episode “The Balance of Terror”, the crew of the Enterprise was forced to respond to attacks on Federation outposts along the Romulan neutral zone, made by a new and unseen enemy with sophisticated, as yet unknown weaponry. The enemy ship could electronically cloak itself from sensors and from being visibly seen. Because of the power required by the plasma weapon however, the ship had to un-cloak before they could fire. When the ship became visible, the image of a great orange bird of prey could be seen on the lower hull of the ship. Once the weapons fired, the great bird of prey disappeared again leaving only the image of a predatory bird that could attack and then retreat into the darkness.

Round2/Polar Lights has introduced a new kit of this mysterious Romulan ship in 1/1000 scale to go along with their line of other Star Trek kits in the same scale.

I would like to thank Round2/Polar Lights for releasing this great, newly designed Romulan Bird-of-Prey (BoP) kit in The Original Series (ToS), Star Trek genre and for providing this kit to IPMS USA for review.

Since Round2/Polar Lights began re-releasing the original AMT Star Trek kits and pressing forward with new kits, the packaging has been part of the experience. There is colorful artwork and printing on all five sides of both the top and the bottom of the box. On the bottom of the box there is a short narrative of the Romulan ship depicted by the kit and the Star Trek episode in which it debuted. The box gets your attention and gets you really interested to get going on the kit

When you open the box you will find a total of 17 parts (14 for the Bird-of-Prey and 3 for the stand), a decal sheet and a double-sided black-and-white foldout with the build instructions on one side and a painting guide and decal placement guide on the reverse side. Round2/Polar Lights recently introduced a new, smaller dome stand that uses a wire to support the model as if it were in flight.

With only 14 parts, the original series Romulan Bird-of-Prey (BoP) makes a great weekend project, even for a parent trying to help a child get interested in modeling. This kit is very precisely engineered for a snap together kit so the engine pod halves, the wing halves and the fuselage halves all line up very precisely when they are pressed to fit. When kits are designed under these tight tolerances, there can sometimes be issues with subassemblies and in this case one of those issues did crop up - where the wing joins the fuselage. There are two tabs inside the fuselage and two small slots in the wing for each wing joint. Because of the angles inside the fuselage and the dihedral of the wing it is difficult to line up the slots over the tabs. This is where a little modeling experience will be useful. If younger fingers are building this kit they may need to get some help from someone with stronger hands to install the wings onto the body. The wing-to-body assembly should be the only issue you have with this kit and when the assembly is complete, the fit is so precise it almost looks like the wings were molded to the fuselage.

With only a small amount sanding to even out the seams on the engine pod halves, the wing halves and the upper and lower fuselage halves, the base color can be applied to the ship. Once the base color is completely dry, you can mask and paint the engine pod inlet rings and exhaust tubes. One of the great things about this kit is that it is a very simple paint scheme but it exactly depicts the ship as it appeared in the TV show. Once the final paint scheme is thoroughly dry, a clear coat will seal the paint and give the decals something to adhere to.

If you are a long-time fan of the Star Trek series, then you know that the bird of prey markings on this ship make it the most recognizable ship in the entire Star Trek genre. The decals that came with this kit fulfill all the expectations. These decals, like those in many of the other Round2 kits, are slightly thicker than most but are more durable and easy to apply. The colors are accurate and the decals are designed to cover the entire lower surface of the ship. The application instructions on the instruction sheet provided a couple hints that make application of the decals a little easier. The instruction sheet shows you where to overlap the wing decal over the edge of the bird’s body. The instruction sheet also point out that it may be easier to cut off the tip of the wing decal and apply it to the engine pod after the wing decal in place. Some bubbles did appear underneath the bird’s body due to the compound curvature of the lower fuselage but a decal setting solution applied generously over the bird’s body and the joints between the wing and the body and the wing tip and the wing, pulled everything down to the surface of the ship very nicely.

The kit provides two different sets of window decals for the leading edge of the body of the ship; there is one set of more square windows where some have been filled in and that match the contour of the windows of the upper surface of the ship and there is a second set of decals that are more simply outlines of the portholes. It is a little confusing because the numbering of the decals on the instruction sheet is different that the numbering of the decals on the decal sheet but after you think about it for a few minutes you will be able to figure out which ones go where.

After the decals are dry, another clear coat could be used to seal over the entire ship. I used a generic clear coat and it had no adverse effects on the decals but you may want to experiment on any unused decals before spraying a clear coat of your completed model.

The last detail to be completed was to install the transparent engine pod domes. The only gap visible between the halves of any parts of the ship was the front end of the engine pods. I simply stuck the end of the tube of putty into the front of the engine pod and gave a little squeeze to fill that gap. I painted the inside of the domes with an acrylic, transparent orange paint and stuck the domes in place over the wet putty. The curing putty had an unexpected crazing effect on the transparent orange paint that gave the domes a swirled pattern that looked like the engines were ‘running’, as they might have appeared on the TV show.

Even though this is a snap-together kit and there are only 14 parts, this is a skill level 2 kit so a little modeling experience will be helpful but this should be a fun build even for a beginner. It will take some strong fingers to attach the wings to body but once you get past that point it is an easy, straightforward build. The giant bird of prey decals can be tricky but once you have the bird’s body lined up on the centerline of the ship’s body, the wing decals line themselves up. Once the kit is complete you end up with a sturdy model that can be taken off the shelf and ‘flown around the room’. The new, 1/1000 scale Romulan Bird-of-Prey is a great kit by Round2/Polar Lights it will be a great addition to your Star Trek collection. I highly recommend this kit for anyone.

Thanks again to Round2/Polar Lights for helping keep the Star Trek genre alive with these great new Star Trek kits and for providing this kit for review. Thanks also to IPMS USA for giving me the chance to review it.

Tabs and slots for attaching wings

Lining up decals on centerline

Completed kit - side view
Previous Next