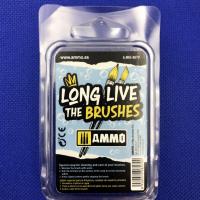 Another item added to Ammo by Mig Jimenez’s line of products for the modeling community is their new item, the “Long Live the Brushes” described as a soap for the cleaning and care of your brushes. From the product web page, the items description states.

“The product is capable of removing acrylic, enamel, lacquer paint residue.  In just two steps you can extend the life of your brushes.

Also, available on Ammo by Mig Jimenez’s YouTube channel is an instructional video narrated by Manuel Gil. This video can be found at:

Packaging: The blister plastic container is approximately 4-1/2” long x 2-1/2” wide. Contained inside is a small plastic hinged round cannister, approximately 1-1/2” in diameter, containing 10 grs (0.35 oz) of the soap. Per the packaging the ingredients include sodium alkyl ether sulfate (a detergent and emulsifying agent) and sodium lauryl sulfate (a surfactant).

So, let’s begin. To test the products effectiveness in cleaning and restoring brushes with dried on paint, I used 3 inexpensive synthetic round brushes purchased from my local craft store, and one of my expensive Windsor & Newton Series #7 Kolinsky sable brushes (#1) round.

The synthetic brushes were dipped into an acrylic, an enamel and a lacquer-based product. The sable brush was dipped into one of Ammo Mig acrylics. All were dipped near, but not touching the ferrule. Paints and products used included:

All four brushes were allowed to dry for six days.

Items used include: a paper towel, a small container of water and the soap product itself. Photos of the brushes were taken Before and After the cleaning process.

First up was the synthetic brush with a hard caked on layer of Tamiya X-6 orange acrylic paint. The brush to the touch was as hard as a rock. It was first dipped into water and then rolled onto the soap. The accumulation was brushed across a dry paper towel. After dipping again in the water, the same procedure was performed again. This time one could see the orange residue from the brush on the soap. After another two times cleaning the brush had no residue left on. As stated in the instructions, leave a little soap, then reshape the brush in order to restore its original shape. A quick swipe with a moistened paper towel left the soap ready for another cleaning. Time to clean and restore the brush back to its original state probably took 5 minutes. Good as new. See before and after photos.

Next up was the enamel loaded synthetic brush. The same procedures as before were followed with the same amazing results. Still as before, little effort was needed to restore the bristles.

Assuming the only way to clean lacquer is with the use of mineral spirits or turpentine I had my doubts if this soap would perform as stated. To the touch the bristles were hard as a rock. Using a Mr. Surfacer # 1000 laden brush, I followed the exact steps as before. But this time a little extra effort was needed using my gloved fingertips to work up a lather between the bristles. After a couple of times no lacquer residue could be seen on the bristles. The results were terrific and as an added benefit there were no harsh smells from mineral spirits or turpentine lingering over my bench.

Now to the ultimate test with one of the expensive brushes, namely the Windsor & Newton Series #7 Kolinski sable brush. After six days of a dried on acrylic paint, Ammo by Mig Jimenez 084 Nato Green, I followed the procedures and steps as before. The results were the same. No residue could be seen attached to the bristles or hidden close to the ferrule. Since this brush had delicate sable hairs, I gently massaged the soap into the brush.

Next day after all the brushes were cleaned, I did an inspection of each using tweezers to part the bristles. I found no left-over paint residue.

Going a step further I decided to bring out my trusted soap cleaner and brush restorer purchased from an art supply house and compare its effectiveness against Ammo by Mig’s “Long Live the Brushes” new product.  I performed the testing using the same procedures, brushes, and paints including the same drying period for each brush. The results were less than I had expected. Not only did it take longer, but more cleaning repetitions were needed to remove the paint residue. The brush with the dried-on enamel was particularly difficult to remove taking upwards of 15 minutes to clean as compared to 5 minutes with Ammo by Mig’s product.

The product did in fact perform as it was advertised. I was able to clean dried on acrylics, enamel and lacquer using synthetic and sable brushes. The cleaning power was superb as compared to the art supply house one I previously used. Very little effort and time-consuming energy were involved. The final result obtained was the brushes were restored to their original shape and texture with no damage to the hairs or bristles. Since this is a mild soap, no harsh chemicals such as mineral spirits or turpentines were used. One might think that such a small container is expensive ounce for ounce compared to other brands of brush cleaners, but I can see many-many brush cleanings can be obtained due to the fact that a small amount is required. The size of the container presents no storage issues. Clean up was a breeze.

For these reasons, I highly recommend “Long Live the Brushes” to clean and restore your brushes.

Thanks to IPMS/USA and Ammo by Mig Jimenez for allowing me to review this product.

Package Back
Previous Next