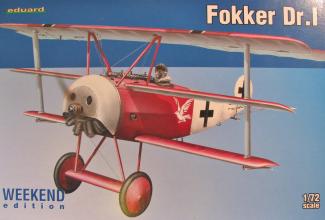 Eduard re-released their 1/72 scale Fokker Dr.1 late last year, but this time in the form of a Weekend Edition kit that includes the markings for two aircraft (one flown by Lt. August Raben, the other piloted by Lt. Hermann Vallendor). The kit builds up easily enough, and I can recommend the kit on its own. For this particular review, I have added parts from the Eduard Zoom set (product SS 576), which did a nice job of touching up the cockpit, engine, and guns. 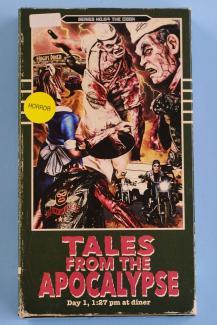 Tales from the Apocalypse - The Cook

The Cook is the lead-off figure in Gecco’s second series and follows the three figures in series one in their Tales From the Apocalypse that I believe are sculpted by Shojiro Kasai. This second series creates Scene 2: Day 1, 1:27 pm at the Diner, and goes with two other figures: a waitress named Cindy who is the sister of the heroine in the first series, and a nameless biker. This figure, the Cook, was attempting to rescue his daughter from a horde of zombies only to find out Cindy had already been infected. In his shock and horror, Cindy ripped into his neck infecting her father. At full zombified rage, the Cook, now wields his heavy frying pan against all comers. 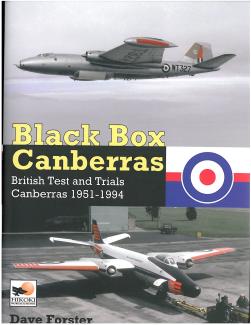 The English Electric Canberra needs no introduction to anyone familiar with post-World War II military aircraft. Originally entering service in the early 1950’s it served with many air forces around the world (including the United States Air Force as the B-57 Canberra) for many years.

Almost from the beginning of its service with the Royal Air Force, the Canberra was used as a testbed for a wide variety of aircraft systems and weapons, ranging from airborne radar systems, to air-to-air and air-to-ground weapons, airborne reconnaissance systems, and even ejection seat testing. Dave Forster has collected a wealth of information regarding the various British test programs that the Canberra participated in and presents it in a very well organized and informative way. 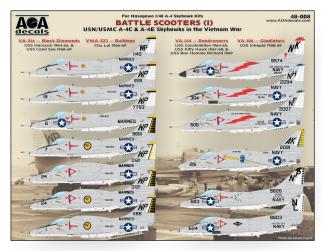 Often forgotten about Naval Aviation in Vietnam is the diminutive A-4 Skyhawk. Despite its small size, this nimble little aircraft could carry an amazing amount of bombs. Flown by the Marines and the Navy, this aircraft carried out some of the most dangerous missions in Vietnam.

AOA Decals continues to release Vietnam era subjects and I for one love their choice of subjects. This set is designed for the Hasegawa kits of the A-4C and A-4E.

The instructions are packaged in a 9 x 12 inch Ziploc bag and are printed in full color on four double-sided pages. The instructions are little works of art displaying the side profile for 13 aircraft. The initial page gives you information to make the Hasegawa kit more accurate. Each aircraft is described in detail to let you figure out what to include from the kit and decals. There is a page for each type of Skyhawk airframe with data and stencils. 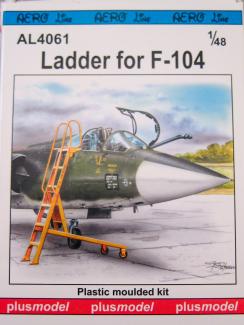 One feature of jets is the need to use ladders to get inside of them. This essential item of ground handling equipment is typically forgotten by model manufacturers. Thanks to Plus Model this key component is finally available.

Packaged in a small top opening cardboard box is a single sprue of light grey plastic inside a plastic bag. There are 15 parts involved in this small kit. The instructions are on the back of the box. The painting instructions are also there but it is quite simple, either yellow or dark green.

Assembly of the ladder is simple enough. The key will be ensuring that everything is squared off.

The dark yellow will highlight this ground handling piece of equipment regardless of the camouflage of your Starfighter. 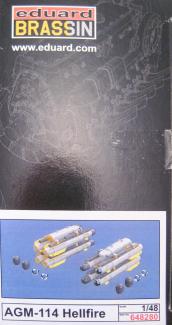 The Apache is an impressive helicopter (when it works, sorry former Cobra pilot said a bad thing). What makes it really impressive is the Hellfire missile system. Also carried by the OH-58D Kiowa Warrior and many drones the Hellfire has allowed anti-tank and anti-personnel capabilities unheard of before. The ability to reach out and torch things 10Ks away is always good for the crewmembers and bad for bad guys.

Packaged in a typical Brassin box with foam cushioning. Inside the foam are three small ziplock bags containing the resin parts in light and dark grey resin. There are two clear resin blocks with the missile warheads. I could not find any flaws or blemishes on any of the parts. There are 50 resin parts. The resin covers two eight missile launchers. This is a typical loadout for the Apache. The Kiowa Warrior would have a single launcher with two missiles per side. 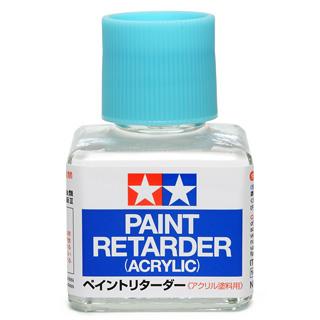 Tamiya acrylics can go down grainy in the right conditions (dry atmosphere, high pressure, big distance) & this retarder helps prevent this, it can also help with airbrush dry tip issues.

You mix it in with the paint or you can mix it with the thinner before thinning the paint. It can be used up to a 1:10 ratio with Tamiya Acrylic Paints.

You must remember that like most other retarders, adding too much retarder causes the paint to not dry.

Also, it is ideal for painting glossy finish surfaces and what I found very useful is using it when brushing Tamiya acrylics. As when brushing the paint starts to cure between brush strokes and using a good mix of paint, Tamiya X-20A thinner and Tamiya's Paint this can help prevent the quick drying that normally occurs.

This is a fantastic product to add with the use of Tamiya paints and I have found it a great addition to my tool box! 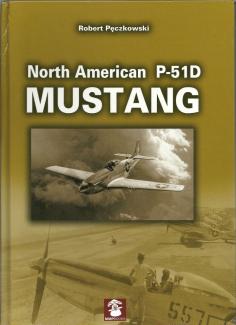 The North American P-51D requires little if any introduction, however reference material for it is always sought after. This book is intended to cover all bubbletop variants: -D, -K, CAC production and Cavalier production.

The book is broken down in a logical way, having a 2-page introduction to the type (as I said, it does not need much introduction). Then it goes into the production series, with the –D and –K series as the main versions covered while the CAC (Australian) and Cavalier production are also covered, but not as in depth as the previous versions. You get many 1/72nd scale drawings of all the different production series.

A really interesting section is a comparison of performance with other fighters of the same time: Bf-109G, Mc.202, Fw-190, P-47 and Spitfire. Let’s be clear, this is not a “how will win a dogfight”, but rather a comparison on climb rates, weight, speed, ceiling and such. 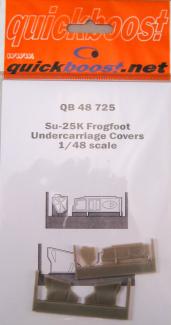 The KP/Smer Su-25 Landing Gear covers lack detail and are slightly thick. Quickboost comes to the rescue with this simple set.

This set is packaged in the typical Quickboost way with a cardstock protecting the contents. You get two pour stubs of light grey resin with exquisite detail. There are four doors two for the front wheel and each main gear. Removal of the parts from the pour blocks is simple enough. Then it is just a matter of cleanup, prime, and paint. The parts feature rivet details and beautifully recessed portions.

Another simple and effective set that will enhance your model with minimal work.

Thanks to Aires and IPMS/USA for the review copy. 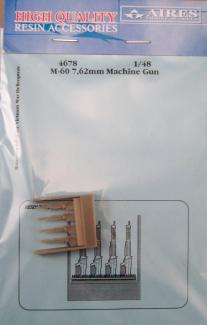 One thing that 1/48th scale helicopter modelers have been without for so long is the lack of armament. Hueys and Loach crewmembers normally carried the M-60 machine gun as protection for the aircraft and crew. Up until now there has been no available machine gun to hang in the door.

Packaged with a card stock backing, this set features four air M-60Ds. The guns feature the front mounted bipod mount molded on. Everything is there except the front gun sight, which in this scale would be almost unnoticeable. The detail on the machine guns is impressive. You may want to add the front sights, but depending on your configuration the guns may not have it. Along with the M-60s you get two small belts of ammunition. They will be fragile in this scale but they are a nice touch. I would have liked more ammo, but I am a gunship pilot and more ammo is always good.