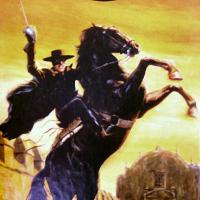 Swish, swish, SWISH! The mark of Zorro! Fear naught, freedom-loving peasants, the masked swordsman is here to protect you from injustice and tyranny! Well, in 1/12 scale anyway….

The character of Zorro dates back to a novel written in 1919; films and radio programs followed, but it was in 1957 that Zorro really entered American popular culture with the premiere of Disney’s TV series featuring Guy Williams in the title role. The show played out like the popular cinematic serials of the period and last for 78 episodes over three seasons. In 1963, Aurora, seeking to capitalize on the popularity of the show with kids, released a kit of the masked one on his trusty steed, Tornado. This kit hasn’t been released for many years and had become quite a collectors’ item, fetching a rey’s ransom on the internet auction sites.

Now, Atlantis Models has re-created this model and many others from the Aurora range, and released them in packaging highly suggestive of the originals, so that those who prefer to build their kits rather than keep them in the loft “as an investment” can enjoy them for what they actually are – a model kit.

Unsurprisingly, the kit is molded in black and includes a base to mount the model on. The breakdown of the parts is mostly quite logical, though the fit is not very good. Robin built Tornado – she likes horses -while I built Zorro. There’s quite a bit of flash on the parts that will need careful clean-up and the mating edges will need sanding to ensure a better, though by no means perfect, fit. Some filler was required in places, especially on Tornado, as well as a considerable amount of sanding – something young and old alike can agree to dislike! Robin painted Tornado a flat black, with some highlights to his mane and tail. He is posed in a rearing stance, and a base is included to glue him to. This was painted a sandy color, then dry-brushed and washed to bring out some of the detail. Attaching the various items of tack, bridle, bit, reins and so forth, to Tornado was a bit fiddly for young fingers, so I helped; along with my trusty sidekick, Superglue, we soon had that pesky task corralled.

Zorro himself was painted in various shades of black, then also dry-brushed and washed to bring out some of the detail. The saddle has some nice filigree detail that was picked out in silver paint, and the tack was painted dark brown/leather. Surprisingly, there is no saddle blanket even though it is depicted on the box art – a piece of glue-stiffened and brown-painted tissue will suffice. A final touch is a nameplate, for those who have no idea who Zorro is.

While this is a fairly simple kit in terms of parts count, there is quite a bit of clean-up required, fit is not very good, and painting is not as simple as one might think, if you don’t want flat-looking figures – after all, most of it is black! Robin was very pleased with our efforts, though she was frustrated by the fiddly-ness of the tack. If sufficient care is taken, this can make up into a nice model of a character who is still popular, though in his more modern ‘Antonio’ incarnation.

My thanks to MegaHobby and IPMS/USA for this chance to review a classic.

Zorro and friend
Previous Next