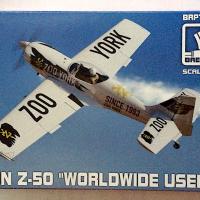 The Zlin Z-50 is an aerobatic aircraft developed in the Czech Republic in 1975. Designed to withstand plus 9 and minus 6 G’s and running a 300 HP engine, this aircraft is a real contender in the competitive aerobatic world and has won a couple of championships. Of course, the plane is only as good as the pilot. For a number of years now I’ve had the pleasure-as have many others-to see Rob Harrison aka “The Tumbling Bear”, perform his brand of low level high energy aerobatics in his bright yellow Zlin. My favorite part of his routine is the passes so low you can see Rob working the controls! Rob has been a stable on the Southern California airshow circuit for years. In spite of a terrible crash in Modesto CA in 2009, Rob supervised the build of his replacement Zlin from his wheelchair and returned to the air. You can see Rob in action on his website. My kids always remembered the Tumbling Bear (he’s a big guy) because he would go down the show line after the show and hand out goodies for the kids. When I saw the marking options for this model, I knew I had to build it.

This kit comes in a small open end box containing two small sprues of parts, a clear canopy, photo etch sheet, and some resin wheels if you don’t want the wheel pants. The decal sheet provides markings for six different Zlins from around the globe as the kit title implies. In this scale the model is very small but all the details are there. The photo etch includes seat harnesses, antennas and trim tabs. The kit builds up quickly with a few challenges. Separate prop blades require you to have some kind of layout template to position them in the spinner. There are no alignment pins so check very carefully before the glue sets. Cockpit amenities include a seat, stick, rudder pedals, instrument panel, and cross member behind the seat as well as the aforementioned seat harnesses.

Of the six marking options, four are very tricky requiring some microscopic masking to achieve parity with the real thing. Robs aircraft looks simple till you look under the wings where he has a pattern of red white and blue stripes. I enlarged the instruction sheet diagram to match the actual size of the kit as a template. Even with that as a guide, it’s a challenging paint job. The model was painted with thinned Testors bottle paints applied through my airbrush. In retrospect, the yellow is too dark but I had a deadline to keep so I pressed on. The decals went on easily. The landing gear included some very nice resin wheels. I replaced the exhaust stubs with brass rod and provided a pitot tube from guitar string at the location shown in the instructions. I also made a wing mounted attitude indicator from guitar string. The position lights are super glue dabs painted after curing.

Brengun has offered a great kit of a not so common subject and I think it really hits the mark. In a hobby starving for general aviation subjects, this is a welcome addition. Thanks to Brengun for bringing one of my favorite airshow acts to the miniature stage. Also special thanks to IPMS and fellow reviewer (and aviator) Brian Baker, who was kind enough to trade with me after a mailing snafu switched up our kits.