Zitadelle: The SS-Panzer-Korps on The Attack July 1943 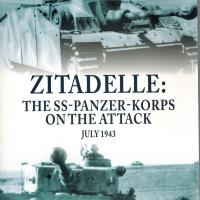 The book presents Operation Zitadelle-Operation Citadel- from the German side. This was the German offensive operation in July 1943 against the Soviet forces in the Kursk salient during World War II in the Eastern Front. This operation basically started the Battle of Kursk. It is considered as the biggest tank battle that has ever taken place.

The book is divided into 13 sections, starting with the plans for the offensive, followed by the beginning of the offensive on the 4th-5th of July 1943. A description of the battle in which the SS Panzer Regiment 2 follows through the 6th/7th of July. The narrative continues with the description of the battle through July 11. Then the battle focuses on the fight for Prochorowka. This battle covers one of largest single tank battles in the history of warfare. Approximately 1000 tanks and assault guns met head to head near the town of Prochorovka, in a battle that became a desperate close range shoot-out. It is believed that this battle was the definitive action in which the failure or success for Zitadelle was decided. The book continues with what transpired on July 13, followed the German resuming their attack, which was stopped by the Russians and their counter-attack it was the beginning of the end for the German counter-offensive in the West and their loss of battle after battle until the end in Berlin. The book ends with a series of pictures of German soldiers before the battle showing their confidence followed with several photos showing concern about the events that took place during Operation Zitadelle. The book ends by introducing you to the photographers responsible for the photos in the book, as well as a small synopsis of their work during the war.

The book is interesting as it has a lot of photos that probably have not been published before and, in addition shows some action shots of the troops involved in the affair. As a history buff I did enjoy the book.

I would like to thank Casemate Publishers and Kagero for the opportunity of reviewing the book.