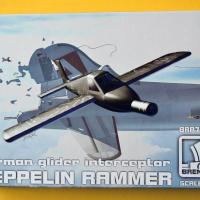 Brengun offers model builders a way to spend a few enjoyable hours assembling a pair of miniature examples of a German WWII secret weapons that never was…well, not beyond a single prototype to be accurate. Kit BRL 72013 provides two small sprues of 16 grey plastic parts, a pair of clear canopies, a very small photo-etched fret of 20 parts and a little wisp of a decal sheet that provide enough components to build a pair of Zeppelin Rammers…one more than the Germans actually had.

The Rammer (German: Rammjäger) was one of the projects for a German 'secret weapon' by Luftschiffbau Zeppelin. It was designed primarily for aerial ramming against the allied bomber fleets that by 1944 were effectively leveling cities throughout Nazi Germany…and, maybe bringing the pilot back to earth breathing.

The Zeppelin Rammer was a rather conventional looking miniature glider with straight, constant-chord armored wings with an enclosed cockpit and adequate armor plating to protect anyone daring and dedicated enough to volunteer to pilot such a weapon. It was a small craft with a wingspan of an inch over 16’. The little thing was to be towed or carried aloft by a mother plane, then released upon sighting an enemy bomber fleet. After igniting a Schmidding 109-533 solid-fuel rocket engine, it was expected to make an initial attacking pass from about 600 yards, firing 14 nose-cone mounted R4M 55mm diameter rockets singly or in a salvo, before attacking the enemy bomber's wings and tails directly in a follow-up pass by ramming them. Following that, the aircraft was expected to survive the ramming of the enemy and glide unpowered to a safe landing on a retractable skid.

After a successful unpowered test flight of the prototype glider in January 1945, an order was placed for sixteen production prototypes for further testing. However, allied bombing raids destroyed the Zeppelin factory before the prototypes could be completed and further work on the project was halted.

This is not the first 1:72 scale kit of the Zeppelin Rammer. Planet Models released one in resin a couple of years ago and some of them may still be found on a few hobby shop shelves, but the Brengun kit is currently available at a reasonable price and provides a few more parts, including a cradle to display the finished model.

Because it is a typical limited run, sprue gates are substantial and parts won’t click together like many mainstream kits today. But the plastic is quite good, fit is not bad, details line up well and accurate control surface alignment is easy to accomplish. As I began clipping parts off the trees, I was reminded of some of Eduard’s early kit offerings…no alignment pins, but kind of fun to be able to work on something like that again.

The space for the pilot is comprised of 5 injection-molded parts that provide adequate detail for a rather spartan cockpit this small. Surprisingly, no seatbelts are provided on that little photo-etched fret. No pilot is going to survive a ramming mission without seatbelts, so I fashioned some from tape. After that, I painted everything inside RLM 02, Brown, RLM 66 and aluminum. The assembly after that was pretty straightforward, parts were cemented together using Tamiya Thin Cement and everything was primed with Mr. Surfacer. Some of the recessed scribing was deepened, surfaces were lightly sanded and I decided to paint everything before attaching the tiny exterior photo-etched details.

The full-color instructions on the bottom of the box provide information for painting three Rammers…the 12th pre-production plane, and 21st and 911th production planes. But, since the Zeppelin plant was destroyed by Allied bombing after the sole prototype was completed, these instructions are obviously hypothetical and serve as suggestions of what might have been. I found the scheme for the 21st plane appealing, so I thought I’d give it a go. Since the colors are called out in RLM numbers it is not difficult to match them using most brands of hobby paints. I used Gunze’s Mr. Color paints and liked the results. It was a challenge to paint the squiggle camouflage on such small surfaces. That process turned out to take much more time than I had expected, but it turned out to be the high point of the build. Decals went on with no problems whatsoever, and after sealing them with Future a light spray of Testors Dullcoat brought everything together nicely.

This kit is highly recommended to those who would like to include a miniature example of one of the few Nazi Germany late war ‘secret weapons’ that actually made it beyond the drawings stage. An Optivisor and pair of needlepoint tweezers are advised to accurately attach those tiny photo-etched parts after everything is painted… and remember that it will be necessary to use superglue (CA). But hey, check out the photos below.

My thanks to Brengun for the review sample and IPMS/USA for the opportunity to review this unique little kit.