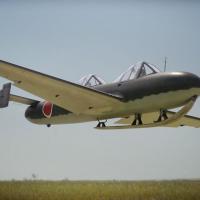 With Allied Forces getting closer and closer to the homeland of Japan during World War II the Japanese military turned to various methods of self-sacrifice to combat the Allied forces. The MXY-7 Ohka (Cherry Blossom) was one of those weapons.

Essentially this weapon was a human guided cruise missile in which it would be carried aloft by a mothership, typically a G4M Betty Bomber, and then released within sight of the enemy naval fleet. The rocket powered craft would hurdle towards its target with a 2,600lb warhead and a pilot behind the stick with the hopes of hitting a target.

Being late in the war Japan was losing its skilled pilots rapidly, and with this particular one use aircraft, Japan would need to be able to train new unskilled recruits in the art of flying very quickly. It was hoped to give the inexperienced pilots some basic knowledge of the craft in which they were going to fly in, so they created the MXY7-K1 2 seat trainer.

This craft was different as it had the warhead removed and replaced with a pilot and water ballast tank, flaps for landing, and a landing skid. The student and pilot sat in tandem individual enclosed cockpits. The training craft would be launched via catapult and had a small rocket motor to give it some flight characteristics. Once the student pilot got a feel of what to expect in piloting the craft they were then relegated to await their last and only sortie.

After the war there these weapons were captured and studied by the Allies. There are a total of 16 various models still surviving all over the world with the only surviving 2-seat version at the Pima Air & Space Museum in Tucson Arizona.

The kit includes 48 plastic injected parts with 2 injected canopies and markings for 1 aircraft. Brengun also sells 3 upgrade sets specifically for this kit in which for this review I utilized the photo etch and the canopy masks for the injected clear parts.

The assembly is fairly simple and straightforward but with the addition of the photo-etch set available does add some patience with assembly but totally worth it. The kit includes basic and rudimentary parts for the cockpits and some of the other smaller details. With the addition of the phot etch set you can get much better detail with the cockpit seats and the headrest mounts.

With the initial assembly of the cockpit details put together and painted, you just need to match up the fuselage sides and with some minor sanding, goes together perfectly. One area that can be slightly tricky, and I myself should have spent more time with, was the matching up of the horizontal stabilizer. This area did require sanding and dry fitting and then once in place will then need to be blended in with a little Mr Putty. My example is ever so slightly off, but that is mostly due to my own doing of thinking it was at a perfect right angle. My suggestion is to make sure the wings are attached before doing this step to eyeball it better.

After the major assembly is completed the addition of the landing skid, and the only resin piece of the entire kit, the tail wheel was next. Be careful handling the tailwheel as I lost it twice by it rolling away on me before assembly as well as popping out of my tweezers placing it in its well. The final details to be added were a photo etched Christmas tree looking antennae that is mounted vertically in front of the student pilots cockpit. My assumption is that this was an aiming device of some sort for the angle of attack. There is a kit part for this but the photo etch part makes it look so much better and to scale.

The final steps were to add the canopies and then paint and decal. The kit includes 2 separate injected clear plastic parts. The only drawback is that they are one piece so if you would want to display the photo etch cockpit details you would need to carefully cut the canopies or my suggestion would be to get Brengun’s vacuformed canopy set for this task. Not only would it be easier to separate the individual pieces and would offer a better to scale thickness. Another aftermarket accessory Brengun provides separately is canopy masks. For this kit I cannot stress utilizing these enough as the framing on the canopies are extremely thin. They are the typical yellow tape masks and are an exact fit for the injected canopies. I am unsure if these masks would be an exact fit for the vacuformed canopies as well but I had none to compare.

For this kit I utilized Mr Color paints, IJN Green and IJN Gray. The decal sheet consisted of national markings and a data plate. The decals were very thin and went down with no fuss at all with some Solvaset.

This was a nice little kit and could probably be completed in a few days especially with working with the photo etch parts. I would seriously consider doing this kit again as it was very simple and can be a great base for a super detail project. Thanks to Brengun for providing the kit for review as well as producing a fairly easy kit of an obscure aircraft.