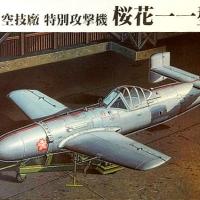 First: Extreme thanks to FineMolds for having dared to finally provide an injection molded kit of this famous weapon. If you have never built a FineMolds model, please understand that they are one of the top-notch short-run companies out there. The first FineMolds model I built was their all-resin and metal “Tony” kit, back in 1992; it heralded in all-resin kits for me, fit great, and cost (at the time) about $100. A very “Princely” price, but it lasted for 15 years after I built it. Not bad for a model to survive three military moves with the lowest-bidder moving companies… Enough talk, on to the “Okha”!

This kit is not all resin, and retails out a bit pricy for what is in the box, but that is due to the limited-run nature of the kit. You can also add an upgrade kit with a brass pitot tube and one fret of brass details including seat belts, etc. In the end, you have an excellent kit of the “Okha”! I did not have the upgrade kit; whether or not you decide to buy that option is totally up to you. I intend to use this kit on a modified Tamiya “Betty” bomber, so I wasn’t too concerned about extra details (yet). I did opt to use some Eduard pre-painted Japanese naval aircraft PE seatbelts to add detail.

In the box are two sprues of gray parts and a fret of clear; as can be expected, the detail level is appropriate for this scale. Included in the kit is the armor-piercing naval artillery round that made up the warhead of the Okha. You won’t see it after assembly, as there is a mounting bulkhead to attach it to. That said, at least it’s educational. The interior is simple, per the actual aircraft. Rocket trust lever, flight control stick, rudimentary instrument panels (both for early and late versions), and the three rocket tubes are all ensconced within the two fuselage halves. Control arms are included for the cockpit and the aft fuselage; I had a bit of difficulty getting the aft fuselage part to fit because I opted to follow instructions. Try this on yours: install all the interior parts, THEN include the aft fuselage control arm and bellcrank.

The entire build was only complicated by my desire to be careful. For fit, I only had to clean up the centerline seam – not a problem.

Paint was overall Japanese naval underside gray; the gloss coat allowed the excellent decals to snuggle down. I only had one failure, and that was because I touched the decal too soon (canopy overhead red stripe). Stenciling is copious and there are five different marking options: three early versions with full wraparound canopy sections, and two later versions with metal aft cockpit fairings.

Final details abound: the lift/attachment ring, ring and bead sight (to assist the operator in hitting the target), and the munitions fusing propeller all combine to make a far better representation of the weapon than the old 1950’s Hawk kit. Surface scribing is perfect. There are flight surface mass balance weights (VERY delicate, handle with care). The only thing missing was a mounting trapeze and instructions to install it in the Tamiya Betty, which can be overlooked because that would be working with the competitor and would also require a major conversion kit to depict the carrier aircraft accurately. One other thing: there is a ground-movement dolly included, along with a tail mount trestle. Makes it look “not so awkward” while sitting on the ground

All in all: I rated this kit a 10. Perfect subject, perfect fit, and an enjoyable build. Well done FineMolds! And thank you, Dragon Models USA and IPMS, for providing this kit for review.