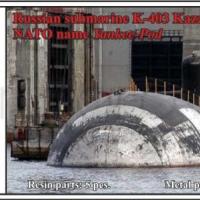 If there was an obscure or one-off submersible designed and built in the 20th century, you can be sure that the folks at OKB Grigorov, a Bulgarian company, will release a kit. (Check out their website, they manufacture and sell a variety of ships, armor and figure accessories as well).

Background and history courtesy of Wikipedia

These two Russian boats are variants of the venerable Yankee class nuclear powered ballistic missile submarines. Yankee Notch (officially titled Project 667AT Grusha) converted subs were attack submarines and first appeared in 1983; four Yankee I boats were rebuilt to this configuration. They incorporated a "notch waisted" center section, which replaced the old ballistic missile compartment, featuring eight 21 in torpedo tubes for up to 40 SS-N-21 missiles or additional torpedoes. The forward torpedo tubes were retained as well, with some reports suggesting that the vessels may have also been able to fire 650 mm (26 in) Type 65 torpedoes.

Yankee Pod (Project 09774 Akson) (also known as the Yankee SSAN) is a converted trials submarine, K-403 Kazan, which was used for sonar equipment, with the namesake pod mounted atop the rudder (a la Victor III-class SSNs). This kit actually features a further conversion called Yankee Big Nose (Project 09780 Akson-2) which was an additional modification of K-403 Kazan for trials of an acoustic system for fourth-generation Russian submarines: the Irtysh sonar system, in combination with the spherical antenna Amfora, occupies the entire nose section of the submarine. Modification of K-415 was started in 1987, but due to the end of the Cold War and lack of funds, was never completed.

On to the Build

Each kit contains a one-piece solid resin hull, a few peripheral resin parts including a stand, and a set of photo etched propellers. I carefully removed the large pour stub on the lower hull using a cut off wheel in a Dremel, and sanded the keel area smooth. Despite the careful packaging, both subs arrived with some damage around the fin area, and fumble fingers here launched two of the broken bits into never never land, so I used scrap styrene and lots of CA to replicate the missing pieces. (see photo). I added the sail fins to Yankee Notch and shot each sub with Tamiya gray primer, which promptly fisheyed, so back to square one, washing each one down with strong dishwashing soap followed by an alcohol bath to remove mold release agent – be forewarned.

After a second coat of primer, I shot Acrylic Vallejo Hull Red to a guesstimated waterline based on some very provisional color views of both boats I found online (black and white source photos of these two subs are hard to find and no drydock pictures exist, so I can’t swear to the accuracy of my color scheme. I found one color profile that suggests a white stripe around the boats at waterline level, and the one image of the Yankee Pod/Big Nose boat, also featured on the box cover, shows a very weathered hull with large patches, probably covering the fiberglass bow dome).

To avoid a stark black upper hull, I mixed some acrylic Grimy Black with AV black and shot that after masking the lower hull. A protective layer of Glosscote followed, and I mixed a sludge wash of gray acrylic, water, and dish detergent) and slopped it all over the various vent holes, ballast tank vents, and weapons hatches. After that dried I used a damp paper towel and cotton swabs to remove the excess, and shot Dullcote on the finished hulls.

I elected not to scratchbuild any aerials or periscopes, but you can find some online photos that show these and easily add them for some additional interest. I held off installing the propellers until the end; these presented several challenges due to the very tiny bond area. I sanded the attachment points flat on the hull, and epoxied the props in place after twisting them slightly. The blades hit the center hull when installed in this way, so there’s a slight error someplace in the molding of the hull. I added the aft bodies to the back end of the props, but getting these lined up was problematic. A small hole in the center of each p/e prop would have helped here. To add insult to injury, one of the props decided to join the broken fin parts in some alternate dimension. I was flummoxed with what to do here but had the idea to put a little paint on my mixing palette and use the remaining prop as a stamp to create the shape on a piece of paper. It took me a few tries to get the right shape, but when the paint dried I used a scalpel to cut out the image. I dipped it in Pledge MSF and painted it the same color – a mix of brass and gunmetal – that I used on the kit parts. It almost passes muster. I shot the resin bases with TruColor Brass and called it a day.

Despite my usual klutziness, these two kits build up into unique variants of the ubiquitous Yankee class, and joined my sub collection in the display case. As I noted, you could get a lot more creative with weathering and antennas and scopes – the baseline Yankee had about 8 of these. But even out of the box they are both different enough to catch the eye.

Thanks go to our friends at OKB Grigorov for their strong and ongoing support to us here at IPMS/USA, and to Phil Peterson for the review opportunity.