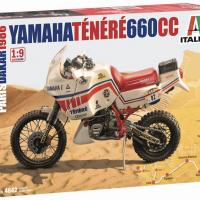 The Yamaha XT 660 was an enduro style bike that featured the most powerful single piston engine of its time back in the 80s. The kit was initially released in the 1980s and was developed by Protar from Italy. Protar had a series of 1/9 bikes as well as a series of Formula One cars in 1/12 and 1/20.

The kit comes on five sprues and has rubber tires, vinyl hoses, springs and a LOT of screws. The only chrome is the wheels and those need to be painted black anyway. The molds are from the 1980s and it shows a bit with large sprue gates and some tool marks here and there, but it’s surprisingly clean and crisp. The overall level of detail is good and the model looks great in the box.

The Engine construction is unique. Instead of the normal halves, the cylinder head is made up of 15 individual plates, it looks great when they are assembled. In a nod to the slight roughness of the parts, the instructions tell you to clean up the surface of the crankcase before mounting the cylinder head on it. I found the fit there to be good after just a few swiped with a sanding stick. The rest of the engine goes together well and looks good when complete.

The instructions show the frame being assembled around the engine, but I was able to put the frame halves together first, clean up the seams, and wiggle the engine into place afterwards. This made painting the frame much easier. At this point I moved ahead in the instructions and assembled the rear suspension and front forks. The reason is I was avoiding the chain until I could get the nerve up to tackle it.

The Chain is unique, especially for being designed in the 80s. It’s built up of four layers of individual links. The design is quite clever, you sandwich the four strips and melt the pins to lock everything together, then clip it all free of the sprue. I did not do the best job with it so my chain is a little stiff, but it’s workable and looks great!

The place where I had the most difficulty was step 13, mounting the swing arm. I had to line up the frame, engine and swing arm for one long screw. This is where I had some fit issues, things were difficult to line up and I had to apply some careful pressure to get the holes all lined up. But it all worked out fine in the end, even if it was a bit of a nail biter.

The only other difficulty I had was the exhaust. It all went together well and the seams were easy to sand out. But when I went to mount it, it did not fit perfectly at the engine.

The decals were in a word, AMAZING! They worked perfectly for me and only needed a little Solvaset to snuggle down and conform. No silvering at all! The body parts went together very well and mounted to the frame with no issues and really brought the model to life.

The exhaust mounted positively and needed no modification or fitting, on some kits this area can be an issue. Installing the rear swing arm and wheel required a bit of care to get lined up and installed. The challenge was not putting too much pressure anywhere while fitting the assembled swing arm. The model is a bit delicate at this stage. The rest of the build was simply adding parts, no real issues.

This kit went together well considering its vintage and makes an impressive display piece due to its large scale. I have built other bikes in this series and look forward to the next release. I want to give a big thanks to MRC and Italeri for providing the kit and I.P.M.S for letting me build it!

Top down
Previous Next