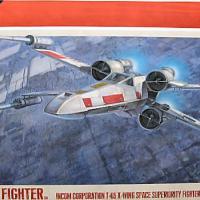 Is there anybody on earth that hasn't heard of Star Wars? Released in 1977, the George Lucas film changed the genre of Sci-Fi forever. One of the biggest stars of the show was the Incom Corporation T-65 X-Wing Space Superiority Fighter, or just X-Wing for short. When flown by the infamous Red Squadron, the X-Wing was able to fight its way to the Death Star and "then maneuver straight down this trench" and launch a proton torpedo and destroy the Death Star. This specific movie event solidified the X-Wing's place in history, or at least in the mind of this young 15 year old boy.

Fine Molds has released a fantastic 1/72nd kit of the X-Wing, but this 1/48th kit takes the level of detail to an even higher level. The kit is molded on six sprues of light grey plastic with no flash anywhere. Two of the sprues are for the display stand. Another clear sprue contains the canopy. A bag of polycaps and screws are included. Screws? Yes screws. This kit can be assembled as a snap tight kit or a "regular" model. There are two sets of markings. The markings are supplied in decal and sticker form. The decals are for "real" model builders and the stickers are designed for newer modelers. The wings are moveable to either the open or closed position. But wait there is more. The landing gear can be displayed up or down. Can't choose which way you like it. Well you don't have to choose. The landing gear can be changed out as you wish? Stickers, screws, multiple position wings and landing gear? Can this model be made into a real replica of the one used in the movie? Oh yes and then some.

Let's get started. Like normal kits the building starts in the cockpit which is easily built up. The cockpit consists of four parts but with careful painting the cockpit looks every bit the part of the movie model. I recommend watching the movie multiple times. I know I did, but it was for motivational purposes. Purely research you understand. "The Empire Strikes Back" is actually a better reference for the cockpit painting. Three decals or stickers are used for the instrument panel.

If you elect to not use the Luke Skywalker figure then you will need to remove the mounting peg off the seat. Since I want to show the kit in-flight I left it and painted the figure. The color call out is carefully shown in the instructions. There are actually three decals that go on the pilot's helmet. The pilot figure was easily painted. I primed Luke with Tamiya Fine White Primer and then painted Tamiya Orange and Semi Gloss Black where the instructions showed. There are decals for Luke's helmet and these conformed well. You also get the option of having R2-D2 separate or installed in the X-Wing. Decals are provided for both versions of R2. This will allows for neat diorama possibilities. I painted R2's top with gloss black and then painted Alclad Aluminum. His body was painted gloss white to provide good coverage for the decals. Fine Molds provides decals for the various areas on his head and body. They fit really well and snuggle down perfectly with Mr. Mark Softener. I set both of them aside until later.

The wings give the X-Wing its name and shape, duh. Assembly of the wings was perfect. The parts fit flawlessly into the wings. The wing halves fit perfectly. I elected to glue where I thought it was appropriate, but it wasn't really necessary anywhere. I painted the interior of the wings with Model Master Titanium, which provided a very dark interior. While I had the color in the paint cup I painted the inner part of the engines. It is easy enough to attach the wings to each other, but it is also easy enough to mismatch them. As long as you remember to have the mounting pins on opposite sides you will be good to go. Bottom line if you do get them wrong you won't be able to attach the working mechanism. As long as you don't glue the wings open they will come apart easily. I speak from experience. You will have to paint the turbine wheels inside the nacelles before assembly as they will be difficult to do if you don't. I brushed painted them Model Master Titanium where appropriate. While you are painting don't forget to paint the interior of the nacelles the FS16440, which is actually an F-14 color. On the inside of one intake there was a mold injection mark that needed sanding out but that was the only thing so far.

The engines are a three piece affair that I elected to glue together. This takes care of the seam on the engines. I expected the engines to be painted a metallic color but the instructions call for the same color as the exterior. A quick check of the real models revealed that Fine Molds was right. Don't know why I doubted them.

Again as I was going to have the landing gear retracted the polycaps were placed where appropriate. I did glue my doors on so I will not be able to exchange my landing gear but I'm not worried as I love the look of the X-Wing in-flight.

Attaching the wings to the fuselage is like building a Gundum model. The wings are assembled with a mechanism that allows the wings to be moved to any position. You must pay careful attention to the instructions by noting the parts position. This will give you a versatile and robust mechanism. The wing assembly is screwed into the lower fuselage half. Offering the top to the bottom fuselage showed no problems whatsoever. Attached with two screws the entire fuselage and wing assembly is very secure.

The cannons on the wing tips were the hardest part of the whole kit. I actually had to use a tad bit of filler. If you don't there is a seam line but even if you didn't use filler the seam wasn't that objectionable as the fit was still very good. The large cannon front pieces could have been a pain if the molds were mismatched but they were actually perfect. A quick swipe with a Master Casters sanding stick and the cannon barrels were perfect. I elected to leave the cannons off until after painting to make sure I didn't break or bend them.

Attaching the remaining parts like the aft fuselage section and the stiffener panels on the side and it is off to the paint booth. How long did it get to this point? Less than 10 hours. No fit problems and perfect engineering made this kit a lot of fun every step of the way or maybe it was the movies playing in the background.

The canopy was masked up with Tamiya tape and sprayed with Gunze H308 FS36375. You could decal the canopy as they are provided in decal and sticker form but you still need to paint a little bit on the fuselage so you might as well paint it.

I preshaded the airframe with Model Master Interior Black. This was followed up by painting the entire airframe Model Master Enamel FS 16440. It looked a little bland but the weathering would have to take care of it. As I checked the internet with the real models they were very bland looking too. So I must be on the right path. It was amazing to me how uncolorful the real models were, but how realistic they looked when filmed.

I coated the entire airframe with Alclad Clear Primer in preparation for the decals. The decals looked a little thick on the sheet but when applied they were wonderful. Utilizing Gunze Mr. Mark Softener the decals settled down fine, even over the most complex raised parts. I did have to slice some and reapply Mr. Mark Softener, but this snuggled everything down nicely. I needed to touch up in some spots with Model Master Insignia Red, but it was only minor. One thing I really liked about the decals was the "chipped" look which would aid in weathering effect. Surprisingly, the stripes on the cannons worked just as advertised. I could have sworn that they would not fit at all but they wrapped around perfectly. Another coat of Alclad Clear Primer and then a coat of Testors Dullcoat prepared the model for the weathering.

Weathering was either going to make or break this model. The first thing I did was tone down the colors of the decals with a very thin dirty wash of burnt umber artist oils. The wash itself was actually used to accent the weathering by drawing the wash in the direction of airflow. Once I was happy with this I used pastels to accentuate certain panels and depict some battle damage. I dry brushed the nose with various Model Master metallic colors for a wear pattern. A coat of Polly-S Dust was added overall to tone down the bright colors and blend everything together. A coat of flat sealed the entire process.

Luke and R2 were added to the model and sealed in with the canopy. With that the actual model was completed. Wow, it was fast. I had it completed in a little more than 15 hours, a record for me.

The seven base had some ejection marks some of them plainly visible that required filling. Once that was taken care of the entire base was painted Gloss Black and allowed to dry. This was followed up by "flicking" gloss white from the tip of my airbrush in a random pattern. Some of the "stars" were picked out with Apple Barrel paints to add visual interest. The Star Wars emblem was sanded off and picked out with white Apple Barrel paints. Once it was all dried everything was gloss coated with Alclad clear gloss and we were ready to photograph the model. OK so I'm a geek and the base can be positioned to display the X-Wing in any one of three positions. A very nice touch. Now if they could make it actually fly.

The fit of the kit is exceptional. The speed of construction is a testament to the engineering. The detail is superb and a direct copy of the studio models used for filming. The decals are very thin and react well with setting solution. There is nothing about this kit that I didn't like. To say that I highly recommend this kit is an understatement.

Thanks to Hobby Link Japan for the review copy.