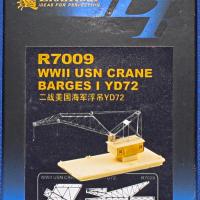 Thanks to DragonUSA for supplying the resin/PE set for review and IPMSUSA staff for handling the request and publishing this review.

Bottom Line: LionRoar has produced a line of WW2 US Navy barges, either mixed resin + photoetch or all metal photoetch. Few parts, a tricky PE folding and assembly job for an unusual subject that would be a necessity for dockyard dioramas. Would have liked better instructions and decals for the barge YD number, but a quirky, fun build. Change of pace weekender for the more advanced modeler.

Cranes are ubiquitous at harbor dockyards. Some are permanently mounted on a flat barge and towed to wherever they are needed. Unlike warships and auxiliary ships, information on barges is rare and suspect. In 1940, the US Navy delivered its first all welded steel crane, with a lifting capacity of 25 tons – YD72. The barge was 100 ft long and 45 ft wide, and stationed at Mare Island Navy Yard, California. It was sold for scrap in 1975, outliving most WW2 warships.

LionRoar, a prolific Chinese producer of 1/700 photoetch sets for naval topics, launched a series of 1/700 cranes, crane barges and barges in 2011 to little fanfare, but a relief for dockyard diorama builders. YD (aka Yard Dog, actually Floating Derrick) 72 was one of the first released. The resin/PE set comes in a nominal 4x2x1 inch (97x64x30 mm) box with pegboard on top, the usual LionRoar black-to-blue fade from top to bottom, a photo of the finished model, and a picture of the fret. Inside you have a small page of Instructions, front and back. Two small bags contain the two resin parts: 1) barge with crane mount base; and 2) crane house. The PE fret is stainless steel (just like the real crane) with 17 pieces (numbered 1-15 as the two doors and two pulleys were the same numbers).

The PE fret has sticky clear plastic on both sides, which means the fret needs to be cleaned with soap and water. The PE parts are fine and detailed, and on the sturdy side of metal heft. Some pieces have embossed detailing. The Instructions are very basic, use exploded views with curved arrows to indicate how to fold the crane, and straight arrows to show where the doors and panels go on the resin crane house. There is no text and no explanations. The instructions need explanation of the order of assembly and that the crane only has one way it can be assembled. Read on to prevent frustration.

Finding resources and photos of YD72 was virtually fruitless. There is one photo that is positively YD72 (the name is on the barge side), but other photos purporting to be YD72 did not have the same appearance. In fact, the only positive ID photo had a lattice crane support that was not in the kit. I resisted the urge to scratch build it since this was a review kit. YD73 looked like a sister, and there were a few color photos from 1959-1960 that were helpful. It was apparent that determining the colors of the barge, deck, crane house, and crane were not going to be authoritative. By piecing together hints from various sources, I concluded that the deck was lighter than anything else, the barge was very dark gray or black, the crane was bare steel metal, and the crane house was a darker shade than the Haze Gray of 1960. For the barge and bollards, I used Weathered Black Floquil Railroad color (enamel). The deck was brushed-on Model Air AV Vallejo Aged White acrylic FS37769 / RAL1015 / 71.132 / #29016X2. After assembly, the crane house was brushed on with Model Master Acrylic 04239 5-O Ocean Gray after Weathered Black was painted in the windows. The crane was not painted, as it would be covered with Flat Clear at the end. Pulley cables (but not the rollers at the ends or the hooks) were painted Weathered Black as seen in photos of other crane barges.

The resin parts had little flash but little detail, although the bollards were excellent and not broken. There were no locator marks for positioning the crane house on the circular base of the barge deck – another missed opportunity for the Instructions. I wanted to rotate the crane house, and it had a hole already drilled, so I determined the center of the circular base and drilled a hole to fit a steel wire. The crane house looked like the position in photos. The PE sides for the crane house fit well except for slight overhang in a few corners. CA glue was used throughout.

The PE pieces were very easy to remove from the fret without distorting the pieces – this is a big plus. I folded the crane pieces separately. The large crane arm (part #2) was folded but I ended up a slight bend in it. The arm support crane structure that mounts on the top of the crane house (#1) folded more easily but be aware it is has a convex shape and is not square, except on the ends. I decided to assemble the crane before putting it on the crane house, which was a wise choice. I glued the crane arm to the crane base with both on their sides in order to carefully position the arm so that the pulleys (parts 6) would fit into the slots in the crane base and into the little box glued on top of the crane arm. Once the crane arm was dry fitted in the crane base, the arm was moved into position for the other end of the pulley to be inside the little box, and the arm glued in place. The next day, the crane was one solid piece, and the pulleys were added, which is extremely delicate and difficult to see even with magnification. I thought I had nailed the three pulley positions, but discovered I did not. No worries, one of the outer pulleys was glued to the outside of the little box. Without explanation from the instructions, it would have been easy to not get the crane arm perfectly aligned with the crane base, leaving a pulley problem. Putting the big crane pieces on their sides was another easy way to assemble the crane that should have been mentioned in the Instructions. Adding the hook pulleys was simple.

After assembly, the crane house, deck and barge sides were weathered with Weather System Rust & Weather Kit, using the black powder mostly, and white & light gray pencils to streak the barge sides and deck. The entire model was sprayed with Testors Dullcote (outside), making sure the crane was matte and not shiny.

A narrow shim on top of the circular crane base took care of the forward tilt of the crane house and still allowed for rotation of the crane house. All told, this is a cute model that has a lot of potential to have figures and dockyard stuff added (ropes, cables, boxes, barrels, cans, life preservers, etc.). Nearby tugs with ropes tied to the barge would also be an attractive extension.

The instructions could use some explanation of how to fold and assemble the crane pieces, add the crane support lattice as a PE piece, and drill a hole in the circular crane base on the barge for a rod that fits into the crane house. Builders - be prepared for some very tight tolerances with narrow PE pieces needing fine tweezers.

At $27 MSRP, this PE set is the same cost as a destroyer-sized ship, but is considerably shorter and with fewer pieces. By itself this kit is basic but can represent YD72 well enough to be presentable yet leave room for superdetailing and addition of accessories.

This PE set is recommended for medium to advanced modelers because of some very small and easily distortable pieces (pulleys). It is an unusual subject and looks just fine next to warships. YD72 can be built in a short time, but please take your time and look ahead at the assemblies. With a little thought and extra accoutrements this can be turned into an attractive addition to any fleet.

Recommended for medium to advanced modelers of 1/700 scale ships with experience in handling, folding, and gluing small metal PE parts. Very highly recommended for dioramas and has the room to superdetail easily. An odd but rewarding short project.

Close-up of crane house
Previous Next