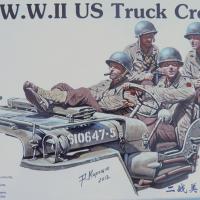 Let me first start off by saying this is not my normal scale for figures. I have been building 1/72nd and wargame scale figures for a short time and even some larger Super Hero kits but these are the first guys in 1/35th scale I have completed since a poorly painted 25 lber crew I did some 30 years ago, so please be gentle on any comments about the paint jobs. Thank-you.

OK, what comes in the box? Well, when I read WWII US Truck Crew I am thinking some guys for a Duece and a half but the artwork on the cover shows them sitting in a Jeep (oops, can I say that) and that would be the ideal vehicle for this set.

The first thing that struck me was the really relaxed poses. These guys look like they could be in a vehicle at rest or moving sedately down a nice dirt road, behind the lines.

Two of the figures really stand out for me, the guy in the front seat with his legs crossed on the hood and a cigar in his mouth and the guy behind him holding a Thompson and a puppy. The other guy in the back is grasping the collapsed tilt and the driver has some action with his coat billowing out a little.

Every time I read a build article I always see people replacing the heads with an aftermarket product. In my opinion, that won’t be needed on these guys as there is very good definition to the facial features. The only thing really lacking is no hair for the back of the head. This can just be painted as not much if visible under the helmets or you can use a little putty and sculpt some if you are so inclined. My guys just stayed bald.

The uniform detail looks great and matches what I have seen for troops in the European theater anywhere from Tunisia on.

The figures are made up of between 6 and 9 parts plus some additional gear and the weapons. The puppy is a two parter and can be painted to resemble pretty much any dog with the cover art looking like a shepard and the paint guide on the back of the box showing him in white.

There is a separate sprue with a good assortment of US Infantry weapons that you can swap out with the rifleman or add to your jeep or a trailer. They also look very good to my eyes.

The instructions are about the only thing on this kit that could use some improvement. As stated, they are in color on the back of the box and just show the figures assembled with numbers for the main parts. Those are easy to figure out. The issue is the extra gear is not noted so while you can see what parts go on each figure you have to decide where they are going to fit (mainly ammo pouches and a sidearm for the relaxing officer).

Generic colors are listed by each figure and a paint chart is included at the bottom showing the recommended colors from Gunze Sangyo, Hobby Color, Humbrol and Tamiya. I used Verlinden Colors and they seemed to work well.

A nice little decal sheet is included with different Division patches and some stripes. I didn’t use this as I am not sure which Division I want to have them from but the decals do look nice and in register.

All in all a nice figure set and while I don’t have a Bronco ¼ ton truck kit to set them in, I do have the Tamiya version in the stash so will see how they fit in it.

Thanks to Dragon USA and IPMS/USA for the review kit.