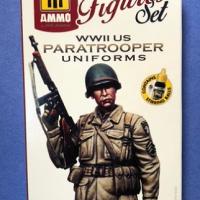 For anyone painting WWII US Paratrooper figures, Ammo by Mig has delivered with a new set of acrylic paints in their Figures set to make finding your colors easier. The set includes six colors (Yellow Green, Khaki Grey, Green Violet, Light Ochre, Buff, and Military Green), which will take care of the uniforms, web gear, and helmets. I find the Figures Set paints to be a little thicker than the standard Ammo colors, which aids in applying them with a paint brush. I would highly recommend this set to any modeler or figure painter that is working on US paratroopers of this era.

To try out my paints, I pulled out my “U.S. Army Airborne (Normandy 1944)” set of figures from DML (kit 6010) released back in 1991 as part of the 1:35 ’39 – ’45 series. While good for their time, the details are a little soft by the standards of today, but they build up easily with no real issues. I also used my previously reviewed Leather paint set from Ammo by Mig (item 7036) when painting the boots.

I primed the figures using an airbrush with Stynylrez Black, then applied their White primer straight down only to add highlights. The base color was then added at a 90° angle followed by the shadow color added from below, and highlight color added from above, all performed with an airbrush. As I had what I considered great success when I tried this before, I was less impressed with my results this time around, but that is strictly on me, I am sure.

After the paints had dried, I performed touch ups using the paints with regular brushes from 10/0 up to #2. I used my Army Painter wet palette for the first time with this review, and for those who frequently work in acrylic paints using a brush, I would recommend giving one of these a try yourself, whether manufactured by Army Painter or another brand. Rather than using drops of paint in a contact lens container (the ones the lenses arrive in) and having it dry up in under an hour, the palette has kept the paint useable for over a week, but they will get thinned by the damp pad under them.

As none of my figures were wearing gloves, I did not need to use the Yellow Green paint. The remaining colors went on without issue by brush, and I added Vallejo Airbrush Thinner when I applied them with an airbrush with no problem. Once I was done with the painting, I did add a coat of AK Uniform Brown Glaze to even out everything.

As far as my hits are concerned, the paint worked beautifully using both a paintbrush straight from the bottle and airbrushed well using Vallejo Airbrush Thinner. The colors provided will take care of the necessities for your paratrooper figure(s) as advertised. While not important, my only miss would be the colors used on the box to represent the included paints can be a little challenging to differentiate, and it can be difficult to see where some of the lines are pointing for the colors. This would only be a potential problem if buying the set just based on the boxing.

In conclusion, I highly recommend this paint set to any modeler that wants to add one or more US WWII Paratrooper figures to their collection. The paints apply well using a paintbrush directly from the bottle and will airbrush well at about a 60/40 mix (paint to thinner) with an acrylic paint thinner.

I would like to thank the folks at Ammo by Mig Jimenez for being gracious enough to provide this Figures Set to the IPMS-USA for review! Thanks to Phil Peterson for running the Review Corps along with our Postmaster Bill, and the other folks behind the scenes publishing the reviews. Finally, my sincere appreciation to all who take the time to read this.