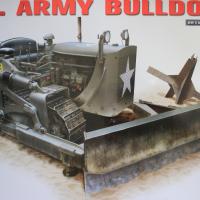 MiniArt has released a new series of U. S. Army tractors and bulldozers that were used in WWII by the U. S. Army. This particular boxing is simply titled U. S. Army Bulldozer but it appears to be the open top version of the Caterpillar D7 bulldozer, which was used extensively in all theaters in many construction and engineering roles. This is my first MiniArt kit in a very long time, but from my first impression it seems very similar to the others I have worked on. Beautifully detailed moldings, a high part count, and a lot of very small pieces. The total part count in the box is well over 700 for a vehicle with a very small foot print.

The first few pages on the very nice instructions are solely devoted to the construction of the highly detailed engine that dominates the center of the kit. Overall, the engine is a very nice little kit in its own right. The only warning that I have is that the plastic that MiniArt chose to mold this kit in is extremely, extremely brittle, which causes many headaches with the hundreds of tiny or thin pieces that make up the engine, tracks, plumbing and other detail parts, as they have a tendency to snap or break easily, especially when removing them from the sprues. This isn’t really a problem in the early engine construction but is a bit of an issue later in the build. Also in step 9 be very careful that the exhaust manifold, part B35, is perfectly vertical when you install it. At this point in the construction there is no reference point as to how it should be installed, but if it is not vertical the exhaust pipe will not mate with the manifold during final construction.

The next major phase is the construction of the frame and driver’s compartment. When working on the frame and the driver’s compartment, keep a careful eye out for notations in the instructions that tell you to open holes in the parts you are working on. There are several points later on in the construction where you need the holes open, but you cannot open them after the parts are installed, and these notations are very easy to miss. The construction of the frame is also a little tricky. The parts used in steps 19 and 20 form a fair number of seams once assembled, but they are mostly on the underside of the kit and are easy to fill and sand. Once the frame is assembled and the engine is installed, the first real issues with the brittle plastic start to appear. This is where you start plumbing the engine and radiator, and installing the levers for the driver. All of these are very thin and prone to shattering at any time, so I would highly recommend investing in some micro or pico-saw blades. I bought some about half-way through the build and they made it a bit easier to remove parts from the trees without destroying the parts. I would also recommend leaving any levers off as long as possible. They are extremely difficult to remove from the trees and even easier to break once installed during handling. I had to rebuild one lever and replace another one completely. Also be very careful when handling all of the very long parts that are used to plumb the engine and hydraulics. They are very thin and fragile. I had to rebuild most of them using superglue before use.

Next comes the tracks and running gear. The tracks are completely movable if assembled properly and are actually very easy to assemble. They also seemed to be pretty strong once the glue had set. However, I had two small issues with the tracks. First they are just as brittle as the rest of the kit, so I ended up breaking a few of the links and one of the pads. Unfortunately, this caused an issue because at least in my boxing I only had enough links and pads to make exactly the number of links needed for both runs. I had no extra links to replace the ones that I had broken and thrown away assuming I would have a couple of extra links to play with. The running gear assembly includes a large number of parts per side but actually went pretty smoothly all things considered. Just remember to open the holes in steps 39, 40, 48 and 49 as they are very easy to miss. Once you have the two halves together and the large spring installed, I would recommend clamping the whole assembly for a few hours to set. I had some fit issues getting the spring and the plates for top and bottom to fit without clamping everything down and letting it set. Also the placements for the large spring and the shields are a little vague, so when installing the shields use a slow setting glue and slide them around until they fit where they need to go.

Finally we are at the final construction. First be very careful when running the final plumbing out to the running gear sub-assemblies. Everything is very brittle and easy to snap off. Also for the radiator shield parts - F2, F19 and F20 - my references show that this is a single piece of steel, but due to limitations in molding it has been reproduced in three parts that end up having a small seam. For the dozer blade, be very careful when handling parts Db14 and Db15, as they are very fragile, but there are a couple of extras included in the kit.

Lastly there are the decals. I chose the second option for a tractor in Canadian service in France in 1944. The decals all settled down nicely and the register is awesome completely covering the dark olive drab. There does appear to be a tiny amount of silvering on the C-RS decals, but it is very hard to tell.

Overall this is a great little kit. I really enjoyed working on it even though it was a challenge at times. It seems to be fairly accurate and it fills a neat niche in the market. The brittle plastic and the high parts count are certainly a challenge, but with a little work you will have a very nice build of a cool U. S. workhorse vehicle. Due the challenges of this kit I would not recommend it beginners, but experienced modelers should have a ton of fun building this little guy. My thanks to Dragon Models USA and IPMS-USA for giving me the opportunity to review this kit.

Completed build, right side of engine, closeup
Previous Next