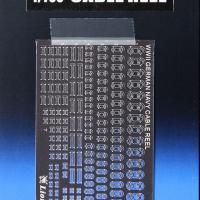 Lion Roar expands its WW2 German Navy 1/700 warship photoetch set lineup with German Navy (DKM) cable reels. Caveat: these are the cable reels only – no cables/ropes are supplied – you will have empty reels after assembling that will need to be filled up (or not) with very fine thread or wire. For the advanced modeler only. This set replaces the older Lion Roar 70008 DKM IV Cable Reels set, which had fewer cable reels per fret.

For a retail price of $11, you get a medium-sized fret of stainless steel with five different sizes of cable reels, a grand total of 84 reels (16, 20, 22, 11, 15 in order of declining size). That is 13 cents per cable reel. You get the matching insides of the reels. The fret is covered on both sides with a plastic peel-away film. Instructions show which "insides" go with which reel. The outsides of the reels have embossed detail, and look very accurate according to photographs of WW2 DKM warships. The detail is outstanding.

After washing with soapy water, I airbrushed the fret with Lifecolor Acrylic Hobby Colors Hellgrau 50 Var. (DKM Light Grey). I painted various diameters of plastic rod with Tamiya XF-52 Dark Earth color (a medium brown color). You will need to remove any molded-on cable reels on your intended model, without removing too much deck detail. I used a sharp hobby knife and a Dremel tool with a small, round sanding attachment. You will have to assemble each cable reel as follows: 1) remove reel from fret; 2) bend sides of reel up to vertical; 3) remove insides for that reel from fret; 4) roll insides into tubular shape till ends meet; 5) add cable (fine thread, wire, line) to inside – one layer should suffice; 6) glue insides to reel. The insides are quite small for the smaller reels, and are somewhat difficult to roll into a tube. These are very small pieces, and you will need a way to apply very small amounts of cyanoacrylate (CA) glue. I suggest you put the seam side of the inside piece down so it will not show (unless the cable hides the seam, of course).

Then you have to decide if you want the reels filled with cables or not. I assume Lion Roar meant for you to thread each reel with very fine wire, line, or thread. The instructions do not mention what to do with the reels after assembly. The instructions also do not provide ship diagrams in order to locate reel positions. That is easily accomplished by removing the kit reels and replacing, or scouring references, but indicates this set is for advanced modelers only.

I thought it would be easier to put a layer of cable on each inside piece before installing the inside to the reel, but that was not right. So I used both human hair (from my wife – a nice reddish blond color that looked like rope) and fishing line (Maxima 0.003 inch fishing line) to thread the largest cable reels. Both were attached with CA glue and wound around the insides to the largest cable reels). This procedure works but takes a lot of time per reel, and the risk of distorting or destroying the reel is high. I did not even try threading hair or fishing line for medium-sized or smaller cable reels. I am not that crazy. I suppose one could cut small, curved segments of hair or line and attach with thin CA glue to the cage before attaching it to the reel. Talk about splitting hairs!

I looked at the previous Lion Roar DKM Cable Reel set (LR700008) from a few years back. This set did not have the insides, and differ from the new set (R7056) by having a solid base. Like other PE cable reels, one needs to paint plastic rod and cut it to fit, then glue it inside the reel, simulating cable/rope. This retro approach was much faster, simpler and less damaging to the cable reels, especially the smaller reels. From a normal viewing distance, the lack of cable detail is not noticeable. So, I used painted plastic rod cut to shape to fill the insides of Lion Roar R7056 reels. They looked fine, and had a little more detail than Lion Roar’s earlier PE set.

Previously built (and reviewed for IPMS/USA) DKM destroyers were chosen to illustrate Lion Roar DKM Cable Reels. Since these models already had the earlier Lion Roar PE cable reels in locations other than the bow, I used the new set reel in the bow positions. These positions are much easier to photograph too.

The old and new Lion Roar PE cable reels both look much better than molded-on reels.

Lion Roar R7056 DKM Cable Reels are painstakingly accurate, down to the need to fill with cable yourself. Unfortunately, you are on your own to find and fill the excellent reels with cable. This makes this set better suited for advanced ship modelers (or perhaps masochists). But the end result is about as close as anyone can get to 1/700 scale perfection.

Instead of using the inside cage pieces, I opted for a much quicker, easier and equivalent appearance by using prepainted plastic rod.

Value is worthwhile at 13 cents per reel, considering the accuracy and appearance of these cable reels. Only a few dollars to fit out a large warship and less for destroyers. If you want contest winners, this is one way to do it.

Thanks to Dragon Models USA for supplying the photoetch set and to IPMS/USA for the opportunity to review it.