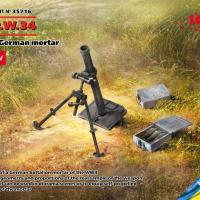 Kiev, Ukraine-based ICM is back with a new offering from its infantry support heavy-weapons line, this time with a WWII German s.Gr.W.34 8cm Mortar. This nice little one-hour build comes with a bunch of extra goodies, and will fit right into a diorama or open halftrack/truck bed. This highly detailed and diminutive subject includes a deployed mortar, three ammunition boxes with lids, four single mortar rounds, two rifles and several other pieces of personal gear.

The 8 cm s.Gr.W.34 was an adaptation for use in self-propelled mountings and employed conventional 8 cm 3.5 kg shells (high explosive or smoke) with percussion fuses. Its range could be extended by fitting up to three additional powder charges between the shell tailfins.

This overall design was conventional and broke down into three loads (barrel, bipod, and baseplate) for transport. Attached to the bipod were a traversing handwheel and a cross-leveling handwheel below the elevating mechanism. A panoramic sight was mounted on the traversing mechanism yoke for fine adjustments. A line on the tube could be used for rough laying. A total of 74,336,000 rounds of ammunition were produced for the s.Gr.W.34 from September 1939 to March 1945.

The mortar tube itself comes in two pieces that will need a little clean-up to remove the seamline. This minor inconvenience will be more than offset by the single-piece, highly detailed mortar stand. Adding the baseplate, mortar stabilization bracket and adjustment piece and you are done.

The three ammunition boxes can be modeled with the lids open or closed, and fir three single rounds neatly inside. A fourth round is supplied as well.

The 4-page instruction sheet includes several cad images, a parts map of the single sprue, and painting directions. There are no markings or stencils included in the kit.

I painted my mortar and ammunition boxes using Tamiya XF-63 German Grey, per the instructions, and the individual mortar rounds using a 1:7 mix of Tamiya German Grey and Tamiya X-6 Orange.

ICM’s recent offerings are a lot of fun to build, and this kit is no exception. It was a nice break from the more complex kits on my workbench, with excellent fit and simple assembly.

ICM deserves credit for the engineering and design here – they get things done without resorting to photo-etch parts, a big plus in my book. I heartedly recommend this kit for modelers of all skill levels.

I would like to thank ICM for providing this kit for review, and to IPMS USA for giving me the opportunity to build it.