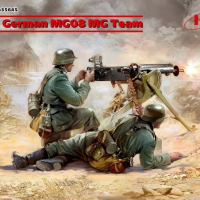 ICM has made something of a name for itself in recent years by releasing some of the nicest WW1 figure sets available on the market. Along with infantry figures, they have started releasing machine gun sets with crew, which is certainly an appropriate addendum to their WW1 line.

Their excellent MG08 is actually available with two separate crews – one appropriate to its World War I use and another for its later utilization during World War II. Although tasked with providing information on the WW2 version, I actually had both in my kit collection, so could make some comparisons.

The WW2 variant includes the famous MG08 machine gun on its distinctive sled mounting, two crew members, two styles of ammunition cans, and two different water cans. Molding is very fine and delicate, with the consequence that the machine mount itself is just a little bit flimsy. Caution is necessary here, especially cleaning off the more delicate parts such as the front fork. The same caution should be utilized on assembling the accessories, as both the ammunition boxes and overflow cans have some very delicate sidewalls and handles.

As molded, the gun comes with the telescopic sight and gun muzzle with flash guard. On my two builds, I dispensed with the telescopic sight for the WW1 version, as they weren’t widely used. On the WW2 version, I replaced the muzzle with flash guard with the muzzle from the kit’s MG 08/15, also supplied. This sort of “updated” the look of the gun just a bit and looked appropriate for this version.

As with most such builds, I began by assembling the guns first. Under normal circumstances this would have presented no problems, but in this case there was an option supplied that threw me a bit – you could either assemble it in the fully upright position or in the semi-reclined position, depending on the front fork position. As this was a fairly fragile attachment, I felt it best to determine the proper position and glue it firmly in place as soon as possible. There was no statement anywhere in the instructions as to which position was correct for this version, so I used the box art as my guide. Big mistake.

Actually, despite the box art, the figures were designed for the semi-reclined version of the gun. Since I had locked both of my copies in the full upright position, I had to do a little figure surgery to get the gunner positioned appropriately. Nothing too dramatic, but you can avoid the same problem simply by assembling the gun trundle in the semi-reclined position in the first place.

So having my figures assembled, I did some pondering on the piece. By WW2 standards, the MG08 was already pretty dated, so saw little real service during that conflict. However, they were extensively used for training purposes leading up to the war. That was the ticket.

To date the figures themselves just a little bit, I replaced their WW2 style helmets with the WW1 helmets available in my WW1 MG08 kit. This made them look a bit more “1930s” as well as painting them in the most colorful rendition of the uniforms themselves. For accessories, I elected to use the 250-round box, which was much more common during this period than the larger wooden 500-round box also supplied. I also used the small rectangular fluid overload container as this was also much more portable. I then placed my assembly in a tiny firing range diorama to set them off nicely. In the pictures you will note that I also assembled an MG 08/15, as this also comes in each set. A last note – hose from the overflow tank is not supplied in the kit, so a suitable piece of wire or solder will do the trick nicely.

Another place where I went wrong – the ammo belt. The ammunition belt supplied is delicately molded, but it had these additional tabs which I thought were mold bleed points. They are not – in fact, they are canvas tabs set sporadically along the ammunition belt to show the amount of ammunition being spent. Do NOT cut these off – they’re correct.

All in all, this was an extremely enjoyable little project as a diorama-in-a box, and the level of detail is very, very good. The figures are at least the equal of Dragon figures. Unfortunately, the sculptor ICM was initially using for their WW1 line is no longer creating these which is really a pity as his creations were the equal of any resin figures on the market. These are still quite good, but not really as exceptional, alas.

That being said, everything looks pretty good in the final analysis, and it’s certainly a charming addition to my figure gallery. There are no real traps on this assembly, and the figures go a long way to enhancing the deadly MG08 to good effect. Anyone who has any interest in older machine guns will enjoy this kit immensely.

My thanks to ICM for adding this to their growing collection and to IPMS/USA for a chance to build it.