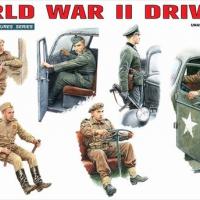 A figure always adds a nice “human” touch to a finished model, and usually modelers’ choices are limited to combat troops for AFVs and infantry. If you wanted a driving figure for your truck or lorry, you had to cope with the usually sub-par “sit and stare ahead” type figure in the kit. Not any longer! MiniArt has released a set of great driver figures in a variety of poses, including a traditional sitting/driving figure. Most of these are already in poses of interaction, so are perfect for dioramas or stand alone additions to a finished model.

Comprising of six full figures assembled from 48 parts, you get the following:

The molding is very nicely done with adequate detail on the uniforms. Some facial detail is a little soft, so you may choose to replace the heads with resin ones (as I did on one figure) and jump the quality up a notch. There are mold seams present, but some swipes with the file and sanding sticks takes care of that. One item I thought was nice was the variety of head gear, including a knit cap for the US Driver. Speaking of the US Driver, I also thought the uniform was of interest as he is wearing the tankers one-piece overalls and wet weather boots (already thinking 2-1/2 ton with snow chains and mud or snow.)

Assembly was straight forward and I had no issues fitting the parts. In fact, the parts fit almost perfect. Some of the good fit came from the softer plastic “melting” a bit more using liquid glue so joints were naturally filled as the glue softened the plastic. A few swipes with the file and sanding stick were all that was needed to clean up the joints.

Overall, a great set and I can see these being added to any modeler’s collection to have on hand just to add a figure to their trucks. I know that at least three of these are going to be used very soon on a few of my projects! Many thanks to Modeland IPMS USA for supplying the review sample.