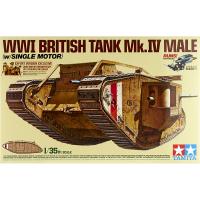 The First World War, which marked its 100th Anniversary this year, was the first truly “Industrial War”. The slaughter on the battle fields, at sea, and in the air was aided, and the conflict prolonged, due to the industrial capacity of the belligerents to churn out the machinery of warfare. In particular, the relatively new invention of the internal combustion engine provided new killing “machines” in large numbers: the aeroplane in the sky, and the tank on the ground. And while both sides utilized aeroplanes for reconnaissance, bombing and aerial combat, it was the British and then the French who came up with the tank, the German and Austro-Hungarian forces having next to no tank production of their own during the war. The vast majority of the tanks utilized by the Germans on the Western front were in fact captured Allied tanks!

Over the years models covering air combat in The Great War have been fairly numerous. Airfix, Revell, Esci, Roden, Eduard to name just a few have produced lots of 1/72nd kits, while Eduard, Dragon and Roden have produced a goodly number in 1/48th scale. Lately the New Zealand firm of WingNutWings has taken the modeling community by storm with their superlative 1/32nd aviation models. On the ground, however, it has been a quite different story. YEARS ago Airfix produced a British Mk.I Male tank in HO/OO scale, and it must be 20 years ago that Emhar started producing models of British and German WW1 tanks in both 1/72nd and 1/35th scale. However, with the 100th anniversary of the start of the conflagration, things started to heat up on the ground pounding front. Meng Models from China issued a French FT-17 tank in 35th scale, while Takom of China did the same vehicle in 1/16th scale, while Takom also produced the French St. Chamond tank in 1/35th scale as well. Now hot on the heels of these kits, comes Tamiya’s very first WW1 kit, the British Mk.IV Male tank. And as part of their 40th Anniversary celebration of their motorized model kit line, this new Mk.IV Male tank kit comes with a motor to drive its tracks!

Despite what some might refer to as the “toy like” motorization of this kit, the quality and detail of the parts is first rate. When the kit is completed the modeler is left with an excellent replica of this iconic British military vehicle. The kit parts (other than the motorization bits and bobs) is almost exclusively injection plastic, but Tamiya does throw in some metal chain to detail the unditching beam that was carried on these vehicles. The kit also comes with a set of five British soldiers in the US market release of the kit; sold separately.

Construction of the kit starts with the assembly of various motorization parts such as the clockwork drive mechanism, the battery holders etc. I dispensed with ALL of this paraphernalia as it simply wasn’t necessary for the kind of static display model I wished to create. In fact I am not quite sure what the goal of this kit as originally envisaged is? The set up allows for a vehicle that goes forward in a straight line. There aren’t any wires coming out the back as there were when I was a lad, allowing you to steer the vehicle through a small control box. And just starting the vehicle and putting it on the ground to go rushing forward and to crash into the first hard object it hits, seems like a sure fire way to damage your creation? But I digress...........

The kit is yet another wonder of Tamiya engineering, with all the parts fitting together perfectly. The instructions don’t leave you in any way guessing as to how the parts go together, nor are the instructions overly crowded, so that no confusion exists as to where a part goes, exactly. Being of a simple rhomboid shape, there are a few large flat sided panels festooned with excellent rivet detail. Since the kit was designed to “work”, there 54 two and four part “road wheels” to assemble in Section 13 of the instructions, and these need to be carefully sandwiched between the inner and outer panels of each “side” of the hull. Since I didn’t intend for my model to “move” I didn’t have to worry about these parts getting glue on them in the “wrong” spot, and thus having them stuck fast and not rotate. If you DO plan on a moving vehicle, care is required here obviously.

Tamiya curiously (or not so!) includes both pressed metal drive sprockets for this kit (for the motorized version), and similar all plastic parts. However, Tamiya doesn’t provide instructions on how to install the plastic parts (and they aren’t completely identical to the metal ones), so you are forced to use the metal parts whether you want to or not. You do need to insure that these drive sprockets are free moving, as it will make the track installation at a later stage much easier. If you were to glue them, you run the risk of the tracks not fitting properly.

The gun positions in the two side sponsons are fairly well detailed , and the crew entry doors are separate parts. However there is still a lot of missing detail inside these sponsons, so if you wish to have the doors open, you will need to scratch build additional detail? The guns pivot both up and down, and side to side, utilizing a series of plastic washers. Everything fits nicely as you would expect from a Tamiya kit, and the sponsons then fit snuggly to the hull sides, utilizing yet more washers (as if you are going to motorize your model, you need access to the hull interior to change the batteries when they wear out, and this is done by removing one or both of the sponsons!) Or you can do as I did, and employ plain old fashioned modeling cement.

The Tracks: Tamiya has hit a home run here as far as I am concerned, as the tracks are similar to the style utilized in their Char 1 bis kit of a couple of decades ago. These come as separate parts in little baggies, and have one small sprue attachment area that needs (to me anyway!) cleaning up prior to painting. I painted the parts with Mr Surfacer 1500 primer, then with Tamiya’s XF-84 Dark Iron (track color) thinned with Mr Color Self Leveling thinner. Once the paint was allowed to set up for a few days to dry rock solid, these tracks simply “snap” together, quite literally. I had both 87 link runs of track assembled in under an hour. They pivot about their hinge nicely. They were a bit (but only a bit) of a chore getting them onto the hull, as there is no “sag” in a Mark IV Male’s tracks! So be careful when applying brute force to “snap” the run together around the hull. Alternately you could just glue them in place! But I was determined to get them on as advertised, and I did. There IS provision to adjust the track tension a smidge, so you are given some leeway by Tamiya, smart people that they are!! Study the instructions carefully to see how this works.

The unditching beam on WW1 British tanks is a common feature, and Tamiya provides a nicely detailed multi part set up, including the aforementioned metal chain. I painted the wooden beam Vallejo “New Wood” followed by an application of Vallejo “smoke” to weather the wood nicely. The chains were primed and then sprayed an appropriate “rust color”, and then the set up was attached to the model once it was painted, using white glue.

Tamiya provides the modeler with a nice color painting instruction sheet on glossy paper, which includes about 20 color photos of “the real machine”, taken at Bovington Tank Museum in the UK. Three color and marking schemes are provided on Tamiya’s decal sheet, which is the normal Tamiya affair: a bit thick, but nicely printed and perfectly useable. Scheme A is vehicle “Glamorgan”, G Battalion, “location unknown” 1918. Scheme B, and the one I chose, is H45 Hyacinth, H Battalion, near Ribecourt, France November 1917. Scheme C is B28 Black Arrow II (as opposed to Black Adder), B Battalion, Fontaine-Notre-Dame, France November 1917. All three are in an overall Brown color, almost identical to RAF Dark Brown as seen on WW2 aircraft. I utilized a bottle of the old Aeromaster enamel RAF Dark Brown for my model. I applied an overall color coat, then lightened it some and applied some panel shading. Decals were applied over a coat of Tamiya X-22 Clear Gloss, utilizing the Mr Mark Setter/Softer system of decal setting solutions. Another coat of X-22 Clear to seal everything nicely. I then rattle canned TS-80 Flat Clear from the Tamiya range of acrylic lacquer paints, which gives a lovely dead flat appearance. Oil paint “washes” were applied to highlight the rivet and other panel details, and some rust colors applied to the exhaust pipes, and to the chains on the unditching beam.

As mentioned at the start of this review, included in this kit, the US Export Version, is a set of five well detailed WW1 figures, one officer leading a charge, together with a Lewis gunner in a prone position, two men crouching, and one charging with a rifle and bayonet (see link earlier). These are actually VERY nice figures, the best I have ever seen from Tamiya, and should paint up very nicely to go along with any diorama incorporating the tank model.

Overall this is a lovely model of the iconic British tank of World War One. It goes together extremely well, is very well detailed, and “looks the part” with its unditching beam when finished. The motorization features are for me an unnecessary feature that puts the price of the kit above what some modelers might deem “reasonable” if all you want to build is a static display model, though the inclusion of the excellent figure set somewhat mitigates the higher price should you be into figures. I believe the model as packaged does offer very good value for the money, and certainly produces a lovely model with the application of some general modeling skills. And isn’t this in the end what it’s all about!!

My sincere thanks to Tamiya USA for providing IPMS USA with the opportunity to review this superb model.