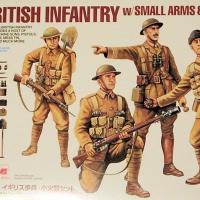 This kit contains four figures (three enlisted and one officer), and two sprues of small arms and equipment. The kit is made by ICM but packaged with the Tamiya name. The small arms and equipment sprues appear to be the same as those in the ICM Anzac Infantry (1915) kit and include a very nice assortment of extras. Each sprue has four Lee-Enfield Mk III rifles and two Ross Mk III 1910 rifles (14 rifles total counting both sprues and the two Lee Enfield rifles from the figure sprue!) along with grenade launchers, grenades and wire cutting attachment. There is also a Webley .45 revolver and Lewis machine gun with bipod. There is also an assortment of personal equipment such as canteens, ammo pouches, etc. and tools including shovels, axes, wire cutters and pick-axes. There are also four helmets, which you will probably need.

Assembly of the kit is straight-forward. The parts fit well and mold seams are easily removed. I found no problems with ejector pin marks or sink holes, however, one of the helmets on the figure sprue was defective. I was able to assemble the figures without any need to fill seams or gaps. I did encounter one problem though: The officer figure’s left arm, which is holding a baton, fits perfectly well until you try to place his personal equipment pouch on his left hip, where it is intended to go. Although the pouch has a recession for the imprint of his arm, it is still not enough and I was faced with the choice of thinning down the bag or let his arm hang farther from his body and fill the small gap in his armpit. It seemed easier to trim down the bag, since it was mostly hollow, so that’s what I did.

The equipment that comes on the figure sprue is good, but some of it may be replaced by the extras. Of note, the equipment on the figure sprue is not identical with that on the extra sprues. The extra holsters are smaller, the extra helmets are larger and the extra rifles are thinner. I don’t know which is more accurate, but the extras seem to have a bit better detail. For example, the extra Lee-Enfield rifles have the rear leaf-spring sight molded separately. Interestingly, the bolt actions are not molded separately as they are on some kits. I find the bolt detail to be more noticeable, but at any rate, it still looks good.

In addition to the fact that one of the helmets on the figure sprue was defective, they appear to be a bit small for the figures, so I replaced them with those from the extra sprues. The officer comes with a soft hat (they type with a flat, round peak and a leather visor). The hat appears to be too tall, compared to reference photos I found on the internet. The box art depicts him with a helmet, which is a reasonable option, but you could probably correct the soft hat or just use it as is, depending on your preferences.

My only complaint about the figures is that they look a little stiff, and their faces are rather devoid of expression. This particularly seems strange for the grenade thrower, who looks like he could be reading a book or daydreaming instead of hurling a hand-held bomb at enemy soldiers as they are shooting at him. I would have liked to see more emotion and exertion on his face, but it is still a very nice sculpture of a stoic Brit.

I painted the figures with acrylics for the most part, although I like to do the highlighting with enamels because it dries more slowly and I find it easier to blend. After applying the base colors, I like to do a couple coats of acrylic washes, the second coat darker and only applied to deep folds and crevices. I use a Decoart compound called “Staining Antiquing Medium” that I found at a local crafts store, which supposedly turns acrylics into a stain. This slows the drying time somewhat and keeps the wash from spotting when it dries.

After this has thoroughly dried, I used lightened shades of enamels for highlighting. For the most part I mixed the colors to suit my taste and did not paint them straight from the bottle. The uniforms are a slightly greener, lighter versions of dark earth.

On the whole I found this to be a very nice figure set and an enjoyable build. I’m quite pleased with the final product. I would recommend this kit without hesitation.

Small Arms and Equipment
Previous Next